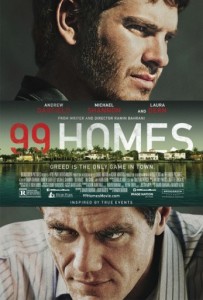 A young single father has to swallow his pride and accept the unthinkable after the family house is repossessed in 99 Homes.

Dennis Nash (Andrew Garfield) is like countless other typical hard-working Americans. He lives paycheck to paycheck, taking whatever construction work that he can find to keep his family in the only house that they’ve ever known. He lives there with his young son Connor (Noah Lomax) and Connor’s hairstylist grandmother Lynn (Laura Dern). When the economy takes a downturn, their home — once a safe haven against the elements — becomes a house of cards in the middle of a wind tunnel. The bank’s local representative, a real estate broker named Rick Carver (Michael Shannon), shows up early one morning to execute an eviction notice. Carver greets Nash’s protestations and pleas with the same empathy that a tsunami extends to a tropical island before engulfing it. To Carver, Nash is just another slacker deserving of his fate.

The desperate father sets out to earn back his home and is aghast when his only job offer comes from the very man that put him out of his house. Reluctantly, he signs on and soon finds that he’ll be the one serving up eviction notices to countless other recently defaulted home owners. It’s an experience that will cause him to question every belief that he once held.

This is a tense thriller that often compels you to look away in shame. It’s the kind of story that we all know exists, but that none of us want to be exposed to so graphically. It means having to face up to some of life’s harshest realities. No one wants to evict people from their homes. At the same time, you certainly can understand a bank needing some sort of protection for their part of the investment. The devil is in the details, and it’s a devil whom none of us want to dance with.

The film wouldn’t be the same without Shannon’s flawless portrayal of the coldhearted capitalist. He looks like he’s cut from a block of pure granite. We can see the hard edges in every scene. Garfield does a fine job as the simple, outmatched, would-be protégé. If anyone comes up short, it’s surprisingly Dern in a role that’s not deserving of her abilities. There’s also one nearly fatal flaw in the storytelling that builds up Carver’s business acumen only to open a door that betrays that setup.

The real power of the film is in the door-to-door interactions. Every knock will send shivers down the spine of any home owner. The knocks of a claustrophobic MRI session are more soothing. We want to close our eyes and forget about the walls closing in on us, but the next knock is just around the corner. 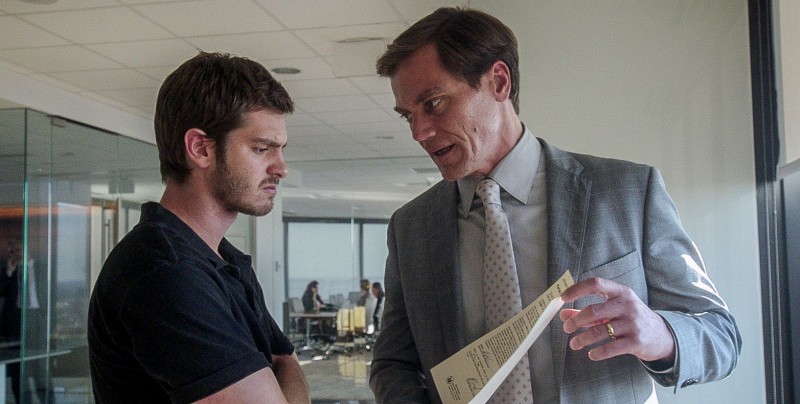