Two psychiatric giants intellectually joust in A Dangerous Method.
This biopic on the complex relationship between Carl Jung, Sigmun 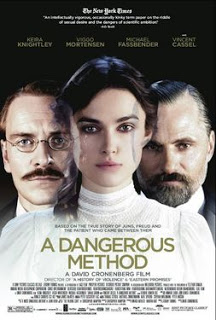 d Freud and Jung’s patient/mistress (played by Keira Knightley) looked riveting from the previews. I was sold on the concept from the outset. The film comes from David Cronenberg who knows how to present a highly-disturbing story.

Initially the film was everything I expected. I was fascinated by the interaction between the principal characters and the manner in which they progressed. It’s a very dialog-driven film and much of the pay-off comes from cutting remarks, careful motive-based word-play and, finally, direct and often stirring action.

The catch is that it just doesn’t sustain the story long enough and begins to fall flat about a third of the way into the film. Once we know the foundation of the three main characters the rest is all just plainly repetitive and, after a period, a bit tedious. The acting is first-rate from almost all involved but it just doesn’t change the unsatisfying end effect. It feels typically too “British” and almost insultingly high-brow. It reminded me of the plodding disaster (for me) that was Gosford Park. Lots of endless talking without much of anything really happening. There’s an entire sequence of scenes involving the always-reliable Vincent Cassel playing one of Freud’s disturbed patients that I still have major issues with. His character is poorly presented and comes and goes so quickly as to leave the viewer wondering what the entire point was.

By the time it came to a close I felt as if I really hadn’t gained any useful insight in the real lives of Jung or Freud other than having found out about Jung’s mistress of which I knew nothing. I suspect there will be Oscar talk involving Knightley but for me her acting her was actually a bit distracting. Her attempts to capture the mannerisms of someone with deep mental issues at the start of the film were so striking that I later simply could not believe anyone could recover—let alone become a professional colleague. Jung also comes off very poorly here (and nearly incompetent) and I suspect historians would take countless issues with that portrayal.

A group of us made it this long to see the film and after it was over we did talk quite a bit about it. It was clear we wanted to like it but ultimately it just didn’t provide enough depth or answers to sustain our interest.