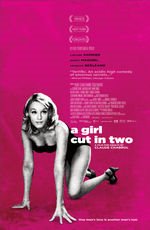 Wow, that title reads great. Thankfully it’s not the way it sounds. I saw a movie called A Girl Cut in Two. The oddest part about it is that the only time that happens is at the end of the film in a sequence that makes absolutely no sense to the rest of the film.

This is a French movie with English subtitles for those who hate subtitles. I don’t mind them at all. A good story is a good story to me. This, however, was not one of those cases. It’s mainly the story of an older French man who, seemingly on a whim, falls for a much younger woman around 35 years his junior. She, of course, just as nonchalantly falls for him without any reason for doing so. To further complicate matters, since the guy is French, he’s also happily married, and no one seems to care at all about that fact. He parades the new girl about at all his favorite haunts like it’s the most perfectly normal thing to do.

There’s also a young challenger for the girl’s affections and he’s no cup of tea either. In fact, he’s a complete prick. This, of course, means that the girl doesn’t just dismiss him at once but keeps him around for some entirely unknown reason.

How this colossal waste of time received so many positive reviews is a complete mystery. This could have a hard time avoiding my least favorite movies of the year list.