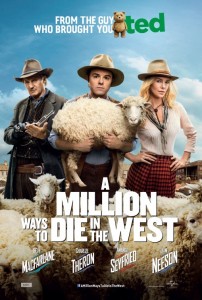 A spineless sheep rancher, obsessed with the harsh realities of Nineteenth Century life, falls for the wrong woman in A Million Ways to Die in the West.

Animated TV comedy virtuoso Seth MacFarlane (Family Guy and American Dad) spoofs the classic Western at the helm of his second feature-length movie. The look and sound of the film’s opening credits perfectly capture the majesty of Hollywood’s most epic Westerns. The names of the genre’s most iconic actors — John Wayne, Walter Brennan, Ward Bond and others — would have been completely at home splashed across the screen above the panoramic beauty of the Arizona backdrop.

MacFarlane stars as Albert, a skittish, ill-prepared farmer who laments the countless, often idiotic ways that people of his era can meet their maker. Even the most seemingly innocuous event bubbles over with deadly consequences. To make matters worse, Albert’s love life is in shambles. The girl of his dreams, Louise (Amanda Seyfried), has grown weary of his cynicism, taking up with the town’s most dependable bachelor — Foy (Neil Patrick Harris), a local successful business owner. Albert is drawn to the unabashedly confident Anna (Charlize Theron), a mysterious new occupant of the town who takes him under her wing. He’s completely unaware that she’s the wife of Clinch (Liam Neeson), the region’s most notorious gunslinger. 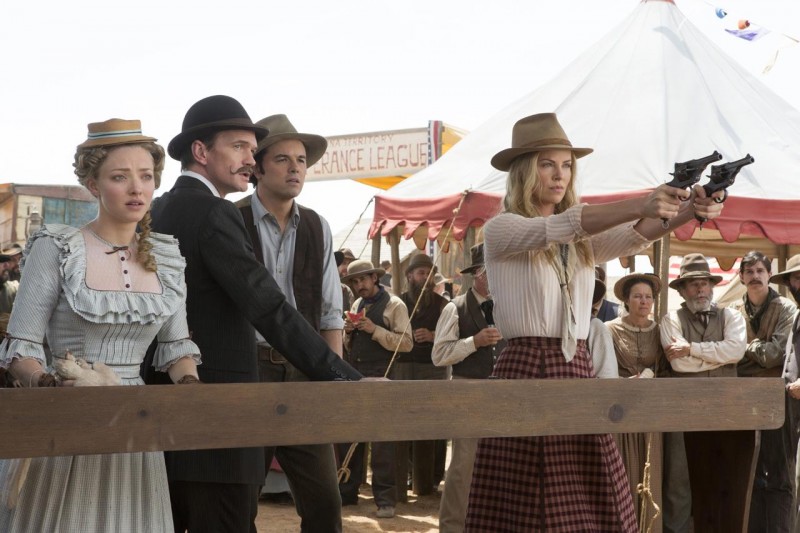 With the start of the story itself, the grandeur of the opening credits quickly proves to be the most polished part of the film. The remaining (nearly) two hours is filled with inconsistent humor that unnecessarily relies on gratuitous, over-the-top scatological humor. MacFarlane seems lost both in the direction of the film and as its most out-of-place actor. That wouldn’t be too bad if he wasn’t also its centerpiece. It’s like watching a room full of top chefs stand by while a well-meaning but incompetent short-order cook makes them all omelets.

The film immediately reminded me — more often for its low points — of Blazing Saddles, Mel Brooks‘s well-regarded but likewise uneven Western farce. One of the biggest mistakes of the film is its dialogue. It makes no effort to sound authentic whatsoever, simply having everyone speak in current-day fashion with lingo that prevents anyone from gaining any sense of immersion.

It’s not all a loss. The women of the film make the most of their roles. Sarah Silverman‘s performance as the town’s morally-centered Christian prostitute (yep) is a close second to Theron’s. Oscar winner Theron shows that she can handle comedy as adeptly as any drama.

It’s pretty obvious to me that MacFarlane slightly undersold the title. Clearly, there are a million and one ways to die in the west.