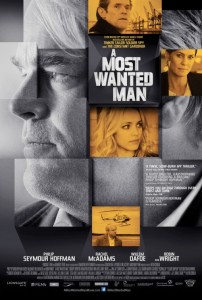 A German intelligence officer searches for a Chechen immigrant whom he’s certain will lead him to a deeper terrorist network in A Most Wanted Man.

The world’s intelligence communities are dominated by both reality and paranoia concerning future potential terrorist actions. Günther Bachmann (Philip Seymour Hoffman) heads up a secret anti-terrorism unit in Hamburg. His main task is to collect as much information as possible regarding any terrorist threat.

The latest target of his attention is an enigmatic Chechen immigrant named Issa Karpov (Grigoriy Dobrygin). His recently deceased father was a well-known Russian militant with clear ties to terrorism. The father left him millions of Euros tucked away safely in a Hamburg bank. Bachmann is certain that Karpov has come to his city to collect the money and give much of it to a terrorist cell. He hopes to use Karpov in a sting to entrap a suspected money man behind a major terrorist network. Meanwhile, the head of Germany’s more public intelligence branch, Dieter Mohr (Rainer Bock), doesn’t share Bachmann’s deeper concerns and simply wants to arrest Karpov before he has a chance to reach out to anyone. While seemingly on the same side, their cross-purposes result in continual clashes and petty mistrust that threaten to derail both their missions. 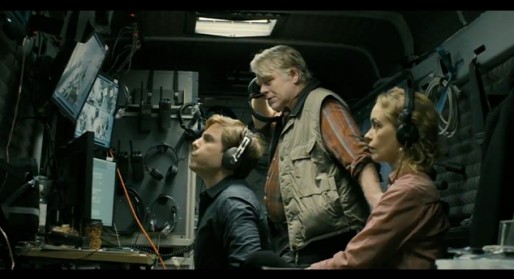 This dialogue-driven tale of international intrigue plays a tense cat-and-mouse game that showcases the lack of respect and cohesiveness that exists between competing intelligence efforts. Hoffman, in one of his last roles, gives another winning performance, although it’s slightly tainted by a distracting and somewhat confusing accent. Much of the story centers on Bachmann’s interactions with Annabel Richter (Rachel McAdams), a young sympathetic lawyer representing Karpov, and Tommy Brue (Willem Dafoe), the not-so-innocent director whose bank holds Karpov’s inheritance. The casting is superb across the board with Hoffman, McAdams and Dafoe joining Robin Wright (as a teflon-like CIA operative) in strong performances.

This feels very much like a championship chess match in every way. Each move is planned to the last detail with every response hopefully accounted for. Sadly, it’s every bit as dull as a chess game to watch. The pacing, at least until the film’s final act, is interminably slow and permeated by heavy, ominous-sounding political babble that’s not straightforward to follow. Karpov’s paper-thin backstory is especially annoying. We’re never quite sure where his allegiances lie, and as a result, we can’t decide whom to root for.

The final insult involves one of the most unsatisfying endings imaginable. It takes a winning cast and an otherwise workable story and turns it into a most unwanted experience.