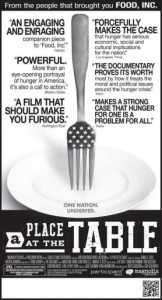 Emotions lie at the heart of every moviegoing experience. If a movie makes you feel nothing, then the filmmakers didn’t do their job right. Most narrative films make you laugh or exhilarate you with drama or action. Documentaries are a different breed entirely. More often than not, they bring out the anger that’s inside you depending on how a subject is introduced and explored. There have been a variety of documentaries about food and water both here in America and around the world. I don’t often pay attention to changes suggested by films of this nature because they almost always have an agenda — hidden or otherwise. However, Forks Over Knives did convince me that less meat and more fruits and vegetables would be a good approach to meals and snacks. A Place at the Table had a different effect on me and triggered some emotions. It gave me a lump in my throat and caused me to feel very sad at the state of affairs of food in the United States. It also made me feel guilty that I’m lucky to not have to live with “food insecurity.” I’m not sure if that’s the expected result. Perhaps the filmmakers wanted to inspire viewers to action to help others. You then have to question whether this is film or propaganda. Perhaps it’s a little of both, but A Place at the Table presents its topic well and even gets some star power to help out.

A Place at the Table is billed as being from the people who brought you Food, Inc., another food documentary that focused on the subsidies given to a few multinational corporations that produce vast quantities of food for a larger profit. The only connections I can really see are the production and distribution companies. As far as I can tell, directors Kristi Jacobson and Lori Silverbush had nothing to do with Food, Inc. They handle the daunting task of informing audiences and touching them as well in a sort of advocacy journalism by mixing interviews with experts, profiles on three people affected by food issues and various graphics and supporting file footage. This mixture keeps the pace up and the content interesting as you wish you could walk out of the theater and both wring the neck of a politician and take one of the profiled people to a nice dinner or supermarket.

There are lots of statistics thrown around. I have no way to verify them in the middle of a movie, so I can only hope that they’re true. 1 in 4 children in America are “food insecure.” 44 million people are on food stamps or government assistance. In 1980, there were 200 food banks. There are now over 40,000. There is a crisis on all fronts. The money provided via assistance amounts to about $3 a day. That’s clearly not enough and can only buy processed food with empty calories. Fruits and vegetables are highly priced because the components of processed foods are subsidized by the government whereas the growers of the much-needed fruits and vegetables are not. These cheap processed foods lead to obesity, diabetes, other physical and mental problems, nutrition problems and lack of focus. Ultimately, the food issues aren’t a result of lack of food but instead arise because of poverty and encompass social and cultural elements. For instance, many people living in poverty are also in “food deserts” miles away from fully stocked grocery stores where they can find the healthy ingredients they need.

I was impressed with the experts who talk about the various food issues in this film. It never descends into a “talking heads” movie because the interesting and passionate commentators don’t drone on but instead deliver quick sound bites. Sociologist Janet Poppendieck, nutritionist Marion Nestle, author Raj Patel and Top Chef’s Tom Colicchio are some of the speakers. Teachers Leslie Nichols and Odessa Cherry talk about their profiled students and how they perform in school. Drexel University professor of public health Mariana Chilton founded Witnesses to Hunger, a program that informs Congress about how hunger and food issues really affect people by connecting faces with the stories and stats. The biggest catch of all is Jeff Bridges. In addition to his acting, he is also the founder of the End Hunger Network and practices what he preaches by volunteering his time and energy to combat hunger. Bridges also must have used his connections because T Bone Burnett and The Civil Wars contribute original music and songs to the soundtrack.

The profiled females really break your heart with their situations and drive home the stats more than any experts or famous actor could. Barbie Izquierdo is a single mother from North Philadelphia with two small children and a low-paying part-time job that nevertheless forces her to use assistance programs. She strives for something more and serves as a spokesperson for Witnesses to Hunger. She later finds a full-time job; unfortunately, it makes her budget worse because she loses some of her program eligibility with that higher salary. Rosie is a 5th Grader from Collbran, CO, who has Nichols as a teacher and mentor. She has trouble concentrating in school because she often goes to class hungry. Pastor Bob Wilson runs a food pantry and after-school program to help out the community. A police officer comments on how he uses Wilson’s pantry because he hasn’t had a pay raise in years and his food budget doesn’t go as far as it used to. Tremonica is a 2nd Grader from the Mississippi Delta in Jonestown, MS, who has Cherry as a teacher. She is overweight and suffers from asthma. Her mother wants to buy healthier food but can’t afford it.

The tagline for A Place at the Table is “One Nation. Underfed.” The film makes a strong case for how the system is broken and people suffer as a result, but its major weakness is that it doesn’t offer that many solutions. I expected a third act with all kinds of suggestions from Bridges and the other interviewees, but such motivation only comes in the last few minutes. The film spends the bulk of its running time on establishing the issues and putting a face on them. Executive produced by Jeffrey Lurie and Christina Weiss Lurie, who also produced Inside Job, A Place at the Table will linger with you long after it’s over and inspire you to do something if you can. This is definitely not a movie for chowing down on popcorn. Eat up the stories instead, and be a part of the solution in some way. I know that I will.