Hunger, obesity and their potential causes are scrutinized in the new documentary from the makers of Food, Inc. called A Place at the Table. The film points out that, in the 1970s, the will was there to end hunger in the United States. Action by the government nearly eradicated the epidemic only to have it storm back onto the front pages as the political climate of the ’80s onward moved to dismantle every program involved. 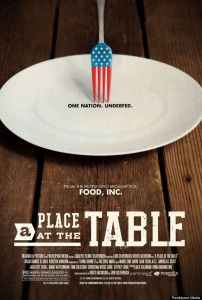 In its most cutting segment, the movie underscores the politics in play by pointing out how Congress took credit for increasing funding to the school lunch program — by just 6 cents per child — only to then turn around and get that funding from the food stamps program.

Unfortunately, there aren’t really any other moments in this film as compelling as this one. When it comes to documentaries, the overriding goal of the film for me should be to bring in new converts to the cause. Far too many documentaries these days fail in that regard. They exist, it seems, to preach to the existing choir.

Nothing in the film will resonate with anyone skeptical of its message. It’s little more than a series of anecdotal sad stories about people around the country who struggle to feed themselves and/or their children. Most on the other side would simply suggest that those people highlighted work to get a better job. In one shot, we hear a Philadelphia mother decry her lack of any money to feed her two children while the background shows a TV channel that’s clearly part of a cable TV subscription. It’s this sort of image that destroys the credibility of both the mother and the filmmakers as well as the central point of the film.

There’s also quite a bit of commentary from actor/activist Jeff Bridges whose interest in this subject goes back a long way.  This doesn’t help the message because Bridges is often seen by the Right as the living embodiment of one of his most famous characters — Jeff “The Dude” Lebowski. He comes off more polished in the film than he does in any recent interview, but that’s not saying much. If this is the best advocate this issue can get, then they’re in trouble.

When the film does attempt to move beyond the personal touch and into pure statistics, it fails again mainly due to the presentation. For example, one graphic shows us a chart covering several years outlining the relative cost of different food groups. One line represents healthier foods (fruits and vegetables), and it shows it dramatically increasing. The other line shows the declining costs of less healthy processed foods. The problem is that the graph shows a perfectly formed X shape. There’s simply no way that chart represents reality. It just looks much nicer to show it with such simple and dramatic lines. Virtually every graphic assumes a nearly illiterate viewer.

We feel for the people interviewed but we do so regardless of differences of opinion on the solution. In that way, the film fails to deliver its intended message and, as such, is a waste of time for anyone other than those who simply want to wallow in their own viewpoint on the issue.