This past week I caught my first official film of the 2010 season and it was quite memorable. The film, A Town Called Panic, is quite a strangle experience but well worth the risk. I’ve come to realize that there’s no way to adequately explain the film as it all sounds absolutely ludicrous on the surface. It’s one of those films you need to see to get the joke. 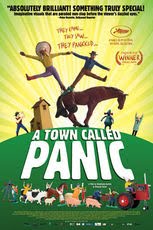 The action is all stop-motion. It’s distantly reminiscent of Wallace and Gromit but then again not. The story centers around three main characters—a plastic cowboy, indian and horse appropriately called Cowboy, Indian and Horse respectively.

In their world nothing with respect to reality matters. You just have to take it all with a grain of salt. The three leads all live together in a surreal abode in an even more surreal setting. The main plot revolves around Cowboy and Indian having forgotten Horse’s birthday and in a panic to find an appropriate gift inadvertently order a few too many bricks for the barbecue they intend to build.

The look of the film is like looking at an amateur model railroad layout just after the owner got his first book on how to do paper mache landscapes. Water is painted on. The sky looks like a painted backdrop. All the other characters are random plastic toys (and scale is no hindrance here either).

The movie is out of Belgium and in French with English subtitles and none of that matters with regard to the fun. Our theater was full of laughter throughout most of the film. The jokes even defy explanation except to say they just work. To try and convey them would be an exercise in complete frustration.

That said, the group of us that saw it found ourselves talking about it the entire evening and into the following days. Inside jokes bubbled to the surface that some got but others missed (like the film’s seemingly odd infatuation with waffles—it’s out of Belgium remember).

The scenes are rife with total absurdities (like a horse shower, or a run-away fire under water) and still they work. The first time Horse goes to sleep you’ll either be rolling with laughter or simply have no sense of humor.

The film is perhaps a tad too long as the joke runs a slight bit thin towards the end but I don’t really care. I’m already looking forward to this one on DVD and sharing it with others. If you can’t accept absurdity in your films avoid this like the plague but if you’ve got the ability to suspend that disbelief, hop right on and enjoy the well-oiled ride.