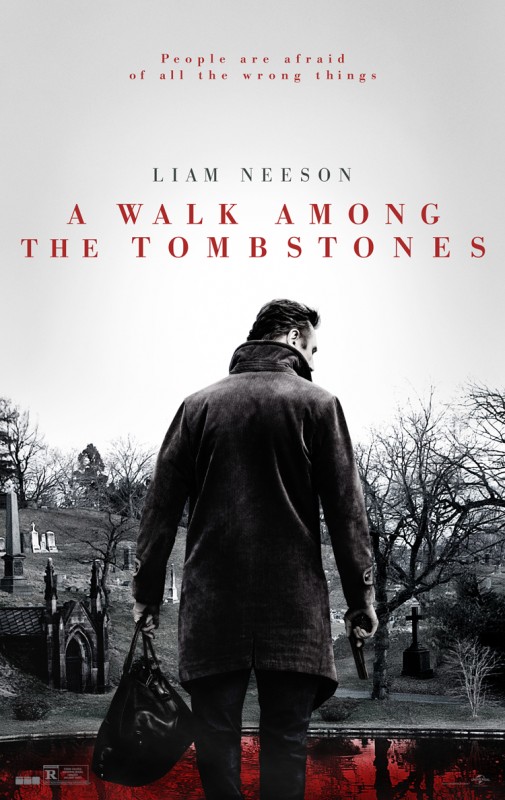 Liam Neeson has evolved into one of the most reliable tough guys in motion pictures. His career certainly didn’t start out that way with most of his memorable work taking place in dramas like Rob Roy and Schindler’s List. He convinced me that he could be a badass when he lengthened both his hair and a lightsaber in 1999’s Star Wars: Episode I – The Phantom Menace. Later, Taken revisited Neeson’s more dangerous side in 2008, and that led to a sequel, a second on the way in 2015 and similar roles in films like Non-Stop. He tried on a black hat for A Million Ways to Die in the West, but he’s just better as a hero. The perfect role for Neeson would involve the chance to show his acting chops as well as his action flick credentials. He chose right with A Walk Among the Tombstones because it involves a flawed lead character who reluctantly investigates some bad guys and finds himself in all kinds of dangerous situations.

Writer/director Scott Frank (writer/director of The Lookout and cowriter of The Wolverine) is perfect for this adaptation of a Lawrence Block novel because he previously wrote the successful adaptations of Elmore Leonard’s Get Shorty and Out of Sight. Block’s novel is the 10th in his Matt Scudder series, and it takes place in 1999 with the Y2K worries as background noise. A 1991 prologue establishes why Matt (Neeson) is now a recovering alcoholic who’s eight years sober and retired from his job as a detective for the NYPD. He takes odd jobs as an unlicensed private detective with payment in the form of “gifts” of money. When a drug trafficker from Brooklyn named Kenny Kristo (Dan Stevens far removed from Downton Abbey) hires Matt, his job is to find the sickos who kidnapped Kenny’s wife and killed her anyway despite the ransom payment.

Frank manages to keep your interest with the slow revelation of clues and tense moments scattered throughout, especially in the final third of the film. The details of the plot and the memorable minor characters played by the strong supporting cast reflect the level of effort you find in a book, which Frank translates well to screen. The first two thirds play out like a good police procedural, and the final act reminds me of thrillers like The Silence of the Lambs in both pacing and violence. The film is unusual in that you see what the killers look like during the title sequence and only find out who they are as Matt closes in on them. Ray (David Harbour of The Newsroom) and Albert (Adam David Thompson) have a hankering for young women as victims. In fact, there’s a lopsided nature to the casting with no major female roles and most of the credited actresses reduced to playing victims to the pair of killers.

This is the kind of starring role for Neeson that fits him as comfortably as Matt’s long jacket with the upturned collars. Neeson mostly keeps his cool as the methodical detective, but there are a couple of phone conversations with kidnapper Ray that will feel all too familiar to fans of Taken. Although Neeson’s on screen most of the time, a couple of actors manage to stand out from the cast. Matt’s investigation leads to Green-Wood Cemetery in Brooklyn, where they shot scenes on location for the full effect of this picturesque historic landmark. Ólafur Darri Ólafsson is creepily effective as groundskeeper Jonas Loogan in just a couple of scenes. I was more surprised by Brian “Astro” Bradley as homeless teen TJ, who nevertheless assists Matt in research. Astro was a contestant on The X Factor who got far, yet he rubbed some people the wrong way with his attitude. I didn’t like him on that show, but he won me over as TJ here. His believable, comfortable delivery is probably informed by his rapping skills. 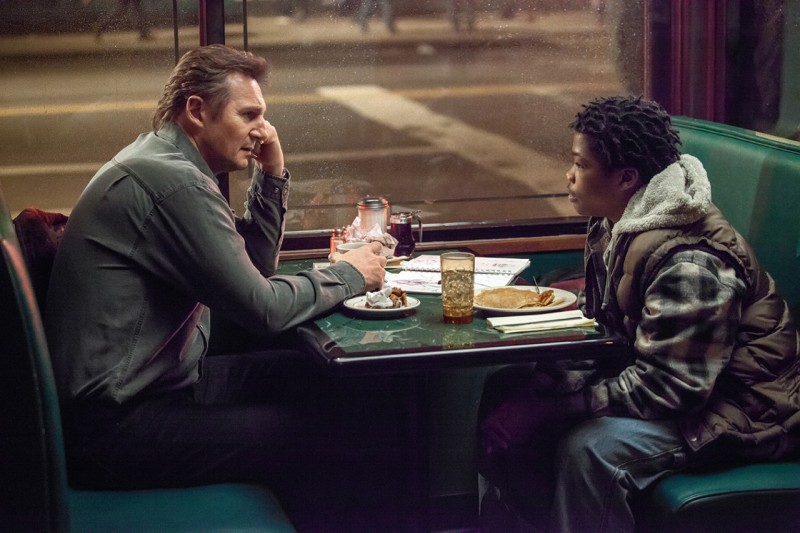 Too often, villains are stereotypes or just problems for protagonists to solve. Ray and Albert are as complex in their criminality as Matt is flawed in his heroism. Such villains make a film more interesting because they’re unpredictable and frightening. The title sequence introduces the duo, yet I’m certain that there are a lot of their aspects that were cut from the film or intentionally left undeveloped. For instance, the cause for their attacks on women is never explained, and other personal details of their lives are not revealed. You only see them in the midst of their crimes or negotiations, and those scenes are chilling. Matt balances the film as its anchor as opposed to Ray and Albert, who are off the rails. This yin and yang forces the film through cycles, and I gladly went along for the ride.

The title of this film makes me think of that Tiny Tim song “Tip-Toe Thru’ the Tulips with Me,” but it’s as far from the silliness and lightness of that song as possible. This is a brutal film that will leave you mentally exhausted at the other end. I was impressed that the characters didn’t do any of the stupid things that movie characters sometimes do that cause you to yell at the screen. There are some dead spots in the middle, and that’s the main reason that I didn’t rate this higher. Some investigation and fact assembly are necessary; a better approach to these scenes would add further urgency somehow. Neeson may have found another character that he can inhabit for a while. There are other novels in the series, so I would be happy to walk with Neeson as Matt Scudder through a graveyard or any other spooky or dangerous place.