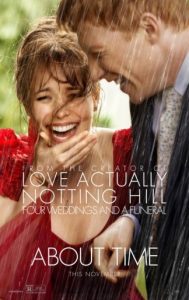 An awkward, socially inept 21-year-old finds out that every man in his family has an incredible special ability and sets out to make the most of it in About Time.

Here we meet Tim (Domhnall Gleeson aka Bill Weasley in the Harry Potter films) who, upon turning 21, is told by his father (Bill Nighy) the extraordinary revelation that all men in their family are able to travel back in time. Tim is, of course, dubious of the claim but gives it a shot only to find out that it actually works. He’s able to live through a moment and, if it doesn’t go just the way he’d hoped, relive it until he’s happy with the outcome. The big question is how best to utilize this unique skill. Tim wants nothing more than to find the love of his life and live happily ever after. When he finally meets the girl of his dreams, Mary (Rachel McAdams), he uses the power to provide the perfect canvas to build their budding relationship. Of course, every silver lining has a cloud, and this ability is no exception. Changes in one moment can have profound, unintended effects on another. It’s that realization that drives Tim to find the right balance.

Of course, like all time travel films, this one suffers from a few critical plot issues and unanswered questions. When Tim goes back, why doesn’t he run into himself? Why not make a fortune in the stock market or at the casino? In the wrong hands, such questions destroy the ability to enjoy the ride. Thankfully, writer/director Richard Curtis manages to strike the right tone, minimizing our disbelief. The same is true for another film that I couldn’t help but compare this favorably to — Groundhog Day. 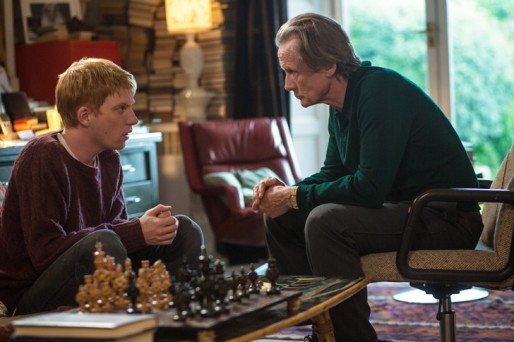 Curtis has a portfolio of films that include Pirate Radio, the Bridget Jones films, Love Actually, Notting Hill and Four Weddings and a Funeral. Together, they’re probably responsible for more tissue sales than any other comparable list from the pen of a single individual. It’s also a compilation that would drive many men straight to the closest bar. I’m not one of them. I’ll gladly trade in my manly-man card for a chance to smile, laugh and cry at his behest.

His work connects with many viewers at a visceral level, showing a real understanding of the mechanics that make the less than perfect among us tick. About Time is his take on a loving but typically arms-length relationship between a father and son. It just wouldn’t work without the wonderful chemistry between Gleeson and Nighy. We simply ache for them. And McAdams once again excels in another perfect girl-next-door performance. Of course, we’re helped along by another notable soundtrack that plucks all the right heartstrings on perfect cue.

Curtis delivers a wonderfully sentimental, emotionally powerful film that does suffer from a bit of a long middle act before launching into an unforgettably potent close. Guys, check your so-called manhood at the door, bring your partner and don’t forget the tissues.