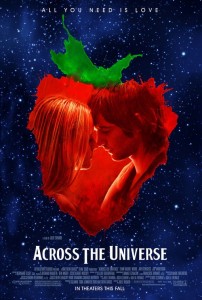 I saw two movies today. I don’t do that often any longer but managed to pull it off anyway.

The first movie up was Across the Universe. This is a musical set entirely to music from The Beatles. Nearly all (and possibly all, though I can’t say for sure) of the characters are named after characters in Beatles tunes. The lead is Jude (Jim Sturgess) and he falls in love with Lucy (Evan Rachel Wood). Lucy’s brother is Max (Joe Anderson) but that’s one name I can’t place. Along the way they meet Sexy Sadie (Dana Fuchs), Jo-Jo (Martin Luther) and Prudence (T.V. Carpio) along with other smaller characters complete their own references.

The movie is, at times, a bit disjointed. Several of the scenes feel like they exist mainly to force in the lyrics of a particular song. Most of the time it’s done fittingly but not always. Also, the producers didn’t seem to be able to make up their mind as to the look of the film. It goes from standard to psychedelic to fantastical often without any sense of necessity. It’s more like, “Oh, now we’re going to play with the focus, and now we’re going to use clown imagery.”

Aside from this the movie is pretty enjoyable. The acting isn’t too bad. The singing is generally very good and the plot is entertaining enough. It also has several scenes that succeed in tugging at the emotions and one or two that you think, “Wow, what a great job!” The ending was very satisfying so overall I’d recommend it.