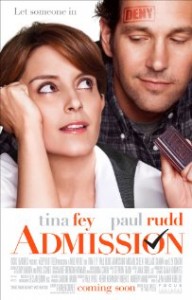 This new quirky film from Paul Weitz has a similar atmosphere as his most famous film to-date, About A Boy (which I loved). Unfortunately it has none of the latter’s character. Admissions has been pumping out previews more than any other film of late and, for a reviewer, you get to a point where you can’t wait for such films to debut just to put an end to it. The reviews did a good job of selling the idea which is no small undertaking. The general idea of a story focused on an admissions officer sounds pretty dull at face value.

Credit Fey for carrying it to the edge as her likeability is pretty off-the-charts right now. Once it does start she does a nice job with the role. It doesn’t hurt that cameras even seem to be on her side. She’s a wonderful girl-next-door, every-woman type. Rudd, likewise, gets a passing grade for his portrayal of the innocent but not-so-innocent director. However, the real head of this class is Lily Tomlin (playing Fey’s Mom). She absolutely shines in every single scene she’s in. Tomlin hasn’t had this kind of aura since All Of Me nearly 20 years ago. This is a talent who needs to get more work.

The problem with the film is that it’s a complete bore. It’s dull, flat and extremely predictable almost in an insulting fashion. In one scene a scholar at a party (Olek Krupa) asks Fey’s character about her mother. He hints several times at being interested in meeting her and then goes on to make a puppy-dog face to drive the point home to any truly dense people in the audience. I half expected a thought bubble to pop up over his head with a pounding heart in it. Gee, I wonder if they’ll get together at some point? Hmm.

The preview, which I have nearly memorized, looks cute enough but there’s just nothing of any depth to be found. Everything feels mechanical and contrived. It was like looking at a mannequin and waiting for it to do something.

I think the most incredible thing about this film is that all the majors in it are undeniably funny and yet there’s not a single laugh in this entire “comedy”.