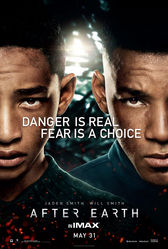 Will Smith costars with his son Jaden Smith as a father and son trapped on a hostile world in the futuristic sci-fi adventure After Earth.

A thousands years have passed since humans were forced to leave Earth and establish a new colony on another planet. The problem is that the planet they’ve chosen, called Nova Prime, is also populated by hostile aliens known as Ursas that can literally sense a person’s fear. One major force against the Ursa threat is military leader Cypher Raige (Will Smith) who’s figured out that the creatures are blind except for their ability to sense fear. He’s able to set his fear aside and become entirely invisible to the aliens leaving him to hunt them without concern for his own safety.

Back at home, his teenage son Kitai (Jaden Smith) is doing everything he can to please his long-absent father by trying to become a top military cadet before he’s really ready. He’s also haunted by the ghost of his deceased sister who died while protecting him some years ago. When Cypher finally makes it back home on leave, his wife convinces him that Kitai needs his father more than ever, and it’s decided that Kitai join his father on a far-off base. In transit there, their ship encounters problems and crash lands on a barely-survivable planet where Cypher is badly injured, leaving Kitai as their only chance for survival.

This is supposed to be a deep, moving father-and-son story about passing the torch to a new generation and the son stepping up to and going beyond the father, but instead, it’s a complete bore. Cypher, as a character, is a dull, robot-like, emotionless soldier, and that comes through at every turn to the detriment of the film. Kitai is pretty much a one-note character who spends the entire movie trying to leverage his exceptional innate abilities against his paralyzing fear of virtually everything.

The sci-fi elements are a mish-mash of quickly-thrown-together bits that really don’t matter. Will Smith, as noted, does what the script asks but can’t overcome it. Jaden Smith as Kitai seems too small for the role and just isn’t believable when it comes time to take the next step as action hero. The pacing is also interminably slow, making the movie feel much longer than it actually is.

Unfortunately, this marks another in a growing — and long — line of major disappointments for director M. Night Shyamalan. I wouldn’t be at all surprised if we don’t see anything else from him for several years. Why anyone would put money out for a film with him at the helm at this point is a total mystery.