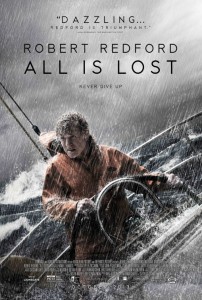 A senior yachtsman, sailing solo across an unforgiving ocean, comes face to face with his own mortality when trouble strikes his lonely boat in All Is Lost.

Robert Redford plays an unnamed solo seafarer who pilots a 39-foot yacht across the Indian Ocean. He awakens one morning to find the ship damaged by a collision in the night and sets about affecting impromptu hodgepodge repairs. However, the sea being a harsh mistress, things don’t simply end there, and before long, Redford finds himself in an increasingly desperate situation until finally having to consider the unthinkable — that there is likely to be no rescue and that he’s going to go down with the ship.

This is one of those films that students of filmmaking love to fawn over. It’s technically brilliant, featuring wonderful cinematography. The veteran actor provides a flawless performance, and this is an immersive, somber work of art that demands respect. Shooting the film clearly must have been pure hell, and the experience takes the viewer on a journey of potentially deep personal introspection.

Unfortunately, it takes on water from unexpected holes and sinks under its own weight. 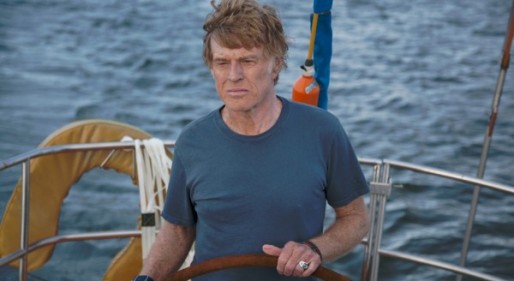 The film starts with narration of Redford apparently reading from a solemn note he’s leaving behind in an attempt to bring closure to his situation. It’s then that the film rewinds eight days to take us to the moments before disaster struck. We encounter Redford’s character alone on this gorgeous boat, but we know absolutely nothing about him, his reason for being there or even to whom he was just directing his comments. We can guess that he’s wealthy, and he seems to know quite a bit about sailing given his handling of the various elements of the yacht. Beyond that, we’re more in the dark than he is on a moonless night.

Once the trouble begins, almost every choice he makes is one we openly question. The obvious decisions seem completely beyond him. Suddenly, we’re watching some clueless rich guy in the biggest of toys and lost in a vast sea, and we have absolutely no idea why he’s even there.

His boat is filled to the brim with every extravagance and advanced electronic tool, but he doesn’t have a simple understanding of how to work the manual pumps. For some unknown reason, his radio is disconnected. Did he leave port that way, or did this happen on the current trip? We have no clue. When things get dire, we suddenly find that he has no idea how to navigate but then suddenly becomes interested in learning when it’s no longer useful to bother. At its most emotional, honest moment, the film itself gives up.

Even the timing of the film’s release is a problem. This is, in many ways, Gravity without the incredible effects or intensity. It feels small and dated by comparison.

This is a compelling film to watch. It’s nearly silent aside from the sparse narration, and it has moments of pure splendor. In some ways, it feels like looking at an evocative painting that brilliantly comes to life in your mind’s eye, but the illusion is ultimately shattered by a narrative that just can’t live up to the painting.