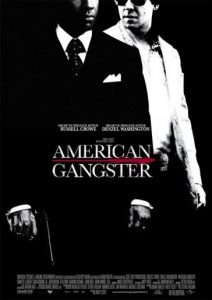 Last week my friend and I saw American Gangster. The only positive thing I can say about the experience is that the acting was superb.

I honestly felt like the movie was four or five hours long. It just drug out every detail to degrees I just didn’t care about. Don’t get me wrong, I’ve often enjoyed longer movies. This one just makes you want to take a nap during most scenes.

With Denzel Washington and Russell Crowe as the two main characters you’d think the writers could be bothered to do something special with them. It just didn’t happen.

There was nothing original in the story at all. The only revelation is that it claims to be a true story and I had no idea about that going in. Perhaps that’s why there’s nothing new in it.

Frankly I’m surprised that it rated into the 70’s on Rotten Tomatoes. Any reviewer that recommended this snooze-fest should be viewed with skepticism from here on out. I suspect most of the positive reviews came from the elitist reviewers who fancy themselves as students of the art of filmmaking and not a student of understanding the market.