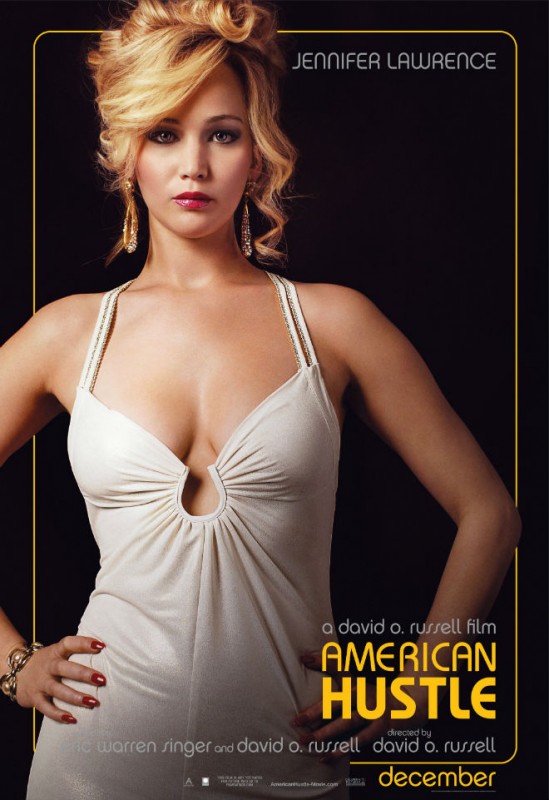 I really like journeys to the past in movies, especially when they stop somewhere in the ‘70s or ‘80s. I’m sure that’s because of my age and my formative years taking place in those decades. (I still can’t imagine life back then or even college without some of the major conveniences like cell phones that we have now.) Maybe it’s why I’m one of the few people I know who truly enjoyed Hot Tub Time Machine. American Hustle is a full-on ‘70s movie from the costumes and hair to the music and pop culture references. That could be a distraction in the hands of less talented filmmakers, but that’s not the case here for the most part. Instead, American Hustle turns a real incident on its side to deliver a drama that merges outstanding performances with a compelling plot.

Cowriter/director David O. Russell is still riding the wave of the past two years as director of The Fighter and writer/director of Silver Linings Playbook. Some people just didn’t get into Silver Linings Playbook, but I fully connected with the story and characters and went along for the ride. Russell and cowriter Eric Singer (writer of The International) are trying to make lightning strike again with American Hustle. It works so well because Russell brings back two each of the main actors from The Fighter (Christian Bale and Amy Adams) and Silver Linings Playbook (Bradley Cooper and Jennifer Lawrence) , adds Jeremy Renner and concocts a plot that’s based on the real-life ABSCAM sting operation with enough variations from the facts to keep everyone guessing. American Hustle has been getting lots of good press and positive word of mouth. That kind of love often automatically follows other film success whether it’s actually deserved or not. In this case, Russell didn’t rest on his laurels and delivers yet another winner.

The film opens on con man Irving Rosenfeld (Bale) fixing his elaborate comb-over right before playing his role in an FBI operation in New York City’s Plaza Hotel circa 1978. Sydney Prosser (Adams) is his partner in crime, and the two got themselves in this sticky situation by conning the wrong guy. Irving and Sydney make money by taking a fee for arranging loans for desperate people. Unfortunately, the loans never pan out, but they still get their fee. Ambitious FBI agent Richie DiMaso (Cooper) catches the pair and decides to use them to his own advantage for another operation by helping him catch four other criminals. At the same time, Richie develops a thing for Sydney. There are plenty of twists and turns in the plot, and some of them involve a fake sheik (Saïd Taghmaoui in one scene and Michael Peña later on) who wants to supposedly invest in Atlantic City and needs help from politicians and other power brokers to smooth out the plan for the resort. This plan ultimately entraps Camden Mayor Carmine Polito (Renner), an ambitious political operator who runs the city and has friends everywhere. Of course, the mob gets involved in all of this, and Irving’s wife Rosalyn (Lawrence) has a big mouth that might ruin it all.

The fun of American Hustle is watching the scams play out and these characters maneuver around each other. In some ways, this is like a heist film because you know a little bit more than some of the characters and there still might be a surprise or two that will turn things around near the end. Each of the main actors creates a full character and really inhabits it. Bale is just a chameleon here and is as far away from Batman as he could be. In a move opposite of his weight loss in The Machinist, Bale proudly shows off a belly that’s a result of a weight gain for this role, and that’s still someone very different than his steel worker role in Out of the Furnace, which is also out in theaters now. Despite the strong performances by the male actors, including a funny turn by Louis C.K. as Richie’s boss, Russell’s secret weapons in this movie are female leads Adams and Lawrence. They’re both bursting out of their clothes at various points in the movie, but that’s not entirely why I like them. Sydney uses an English accent to pull off her scam, and Adams goes in and out of these accents and various aspects of Sydney effortlessly. Adams also gets to deliver an important speech about the characters’ nature and how everybody has a little bit of a con artist in them. Lawrence is even better, and her performance is my favorite part of the movie. She steals every scene with her self-confident Jersey girl and authentic accent, and I wouldn’t be surprised to see another Oscar nomination go to her. 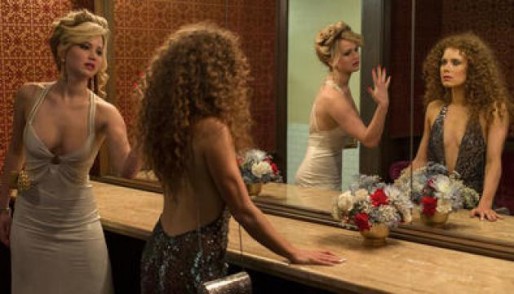 If there’s any negative with the film, it has to be the overuse and occasional misuse of popular music from the era. I’m a big music fan, and that carries over to movie soundtracks as well. If you think back to the way that Quentin Tarantino uses a variety of music to put together an audio journey in his movies (“Stuck in the Middle with You” from Reservoir Dogs or “Misirlou” from Pulp Fiction), you are also thinking about the right way to include pop songs in a movie. Russell peppers the film with hit songs and ruins it in many cases by picking songs with lyrics that almost extend the dialogue into the song. For example, he uses an excerpt from Steely Dan’s “Dirty Work” with the line “I’m a fool to do your dirty work” just as some, uh, dirty work is happening on screen. There are many examples of this. He gets it right in some cases, too, with the use of an Arabic version of “White Rabbit” quite perfect for a scene. Perhaps I’m nitpicking, but when music seems overdone to me with my high tolerance for manipulative music, it must be. I think back to scenes like John Cusack holding up that boom box with Peter Gabriel’s “In Your Eyes” playing on it in Say Anything…, and I’m reminded that songs on a soundtrack can be important to a scene without coming off as excessively manipulative or, worse, unnecessary. Just because it’s the ‘70s doesn’t mean that you just go and grab a bunch of ‘70s hits to put on the soundtrack. “White Rabbit” fits for me. Lawrence looks ridiculous and out of character overreacting to “Live and Let Die.”

American Hustle is one of those movies like Boogie Nights or Casino that’s stuck in an era and people come back to again and again just for the experience. It will likely stand the test of time because there are a lot of positives to the film, not the least of which are an amazing uncredited role — a little too long to be a cameo — and funny scenes like Cooper in curlers or Lawrence in just about any situation. Disco rears its ugly head, but I wasn’t paying much attention given the outfits on the cast and Adams’s flowing curls and plunging neckline. I don’t know how Russell will keep this ball rolling, but I hope that he has had enough success at this point that he gets to pick and choose carefully. American Hustle is authentic and ambitious, and it’s always nice to see the mighty tumble as the low guys on the totem pole move up a notch.