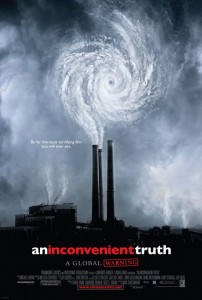 The causes, expansion and impact of global warming are dissected in the documentary film An Inconvenient Truth.

Former Vice President Al Gore takes us on a journey inside his most passionate cause with an in-depth examination of global climate change. The subject matter is presented in a fairly dry style that’s somewhat apropos given the topic. It’s clear that Gore genuinely cares about the environment and is fervent in his efforts to spread the word about the dangers it faces.

Gore does a descent job of conveying the facts and issues but, not surprisingly to his critics, comes off as oddly disconnected from it all. He just does not convey emotion well, period. I’m beginning to wonder if we just don’t understand the way in which Gore presents emotion to the world. When things clearly impacted him, the only change in tone was a lowering of vocal volume. Most people are more animated in their emotions.

Critics of the film perceive it as having more to do with Al Gore and his personal PR than about global warming. A few scenes along the way only help to solidify that perception. Those scenes are meant to convey a sense of purpose and reason as to why Gore is so involved. However, they come off as entirely unnecessary, out-of-place and, worse, look very much to me like pre-candidacy marketing. We all remember the botched election of 2000 and the chaos of its immediate aftermath. A movie about global warming is no place to spend a full five minutes covering that again. Gore could have simply noted that the events of that election helped to focus his attention on what really mattered to him. Instead we get a collage of images and video surrounding the election. It just doesn’t fit. There are also tediously long shots of Gore at his family ranch coupled with childhood pictures and, again, they just don’t work to add to the story at hand. Instead they leave us to question the real reason for their inclusion. 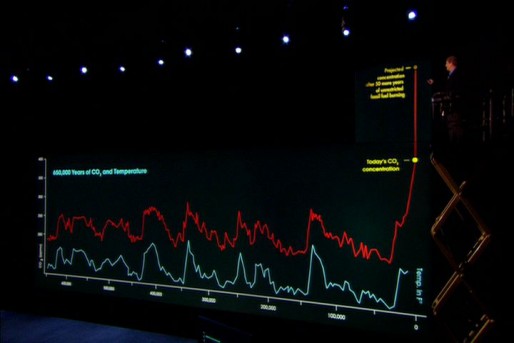 On the plus side, Gore has the ability to make points when he’s dealing with data. He drives home the numbers with ease. The pictures he shows are alarming and convincing. It’s extremely difficult to look at a chart that goes continually upwards and see it as anything but bad news for the environment.

In the end this is a movie whose time has come. I just wonder about the messenger. I would have had more connection to it if, for example, Gore had been involved heavily but instead allowed someone else to handle the presentation of the material. Somehow it would have meant more to me to hear all this from say, Walter Cronkite, than from someone with such an obvious possible bias.