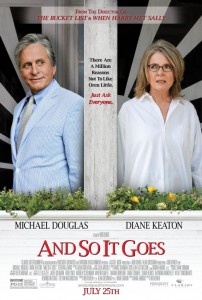 An obnoxious semiretired realtor has to take new stock of his life when his son unveils a big surprise in And So It Goes.

Smarmy but successful businessman Oren Little (Michael Douglas) is looking for one more major real estate deal before he calls it quits. He represents a property with a listing price of $8 million and has no misgivings about using every cheap trick in the book to land a buyer willing to pay every last penny of it.

When he’s not busy misleading customers, he spends his time living in a ramshackle little apartment where he torments his various neighbors with his insensitive behavior. The only one that seems immune to his antics is his immediate next-door neighbor, Leah (Diane Keaton). She manages to just float above it all until Oren finally goes too far even for her. Leah’s sudden take-charge attitude catches Oren’s attention, and seeing her in a new light, he finds himself captivated by her curious combination of strength and tenderness. They say that opposites attract, but nothing is said about polar opposites. 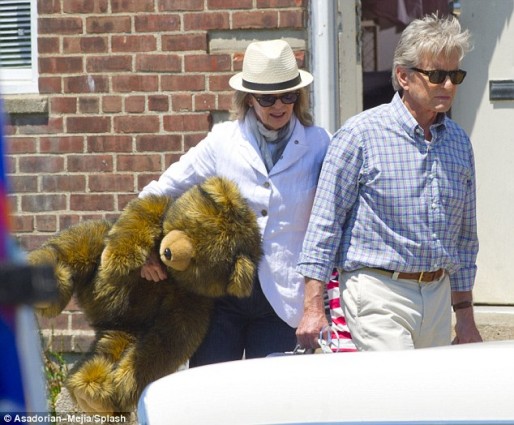 This is billed as a romantic comedy, and director Rob Reiner is certainly no stranger to the genre, having previously directed the 1989 masterpiece When Harry Met Sally…. 25 years later, Reiner gives us something entirely unlike that film. The setup is painfully slow and devoid of anything laugh worthy. We’re not even sure about the background of most of the supporting cast, including Leah. Reiner has a bit part that’s only notable for his character’s disturbing toupee. Once it does finally build to something, the payoff feels flat, lifeless and uninteresting. It’s like a strong, persistent wind that never culminates with the anticipated storm. Instead, it just blows itself out.

There’s a nice small role played by the indomitable Frances Sternhagen (Cliff Clavin’s mom in Cheers), but there’s little else of note. Even a cameo by legendary singer Frankie Valli seems misspent. Most viewers are unlikely to even notice it. The insightful, witty and often hilarious dialogue that once dominated Reiner’s body of work seems entirely foreign to his latest films, including this one.

In 1984, Reiner directed his first film, the heavily praised This Is Spinal Tap. It was followed by six excellent films in a row over the next eight years. Reiner broke the streak in spectacular fashion with the universally panned North in 1994 before returning to form with 1995’s The American President. Reiner hasn’t directed a single successful film since. This dull-as-dishwater entry will do nothing to end his 19-year dry spell.