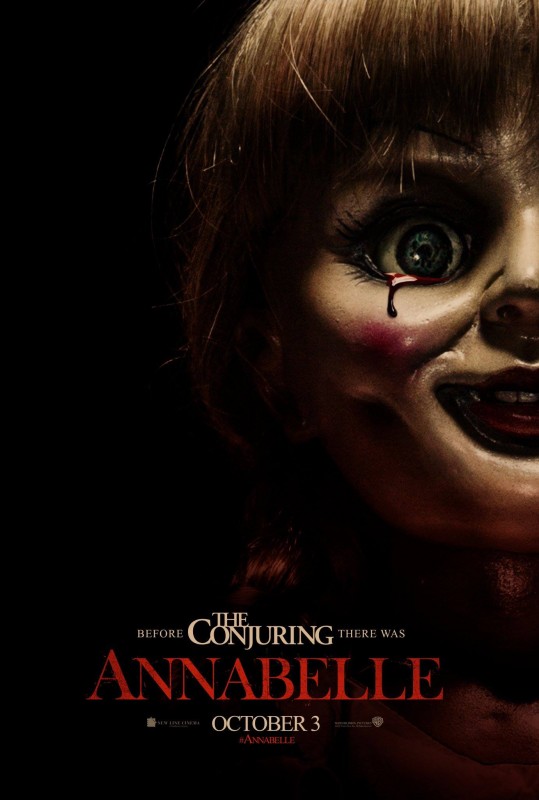 When I was a boy, I had a statue of the Virgin Mary in my bedroom as placed there by my mother. It’s a Catholic thing, I guess. The light above my bed cast some pretty creepy shadows in the room, and if I looked at this statue just the right way, I thought that it moved. Of course, that led to many nightmares of this statue coming to life and chasing me around the house and one truly terrifying incident of sleepwalking in which I ran out of my room and down the stairs in a few steps while half-awake to get away from this flying statue in my nightmare. When I got older, I hid the statue somewhere, and my nightmares stopped. This all leads me to explain the kind of terror that I expect from a movie that highlights a possessed or evil doll. Child’s Play and its sequels got it right with a nasty doll that tricks and attacks its owners. Annabelle disappointed me with its approach, but there are plenty of chills of a different type that will wind you up.

Annabelle is a spin-off of The Conjuring and actually more qualifies as a prequel because the events took place before that hit movie. The poster and advertising campaign make certain that you know that there’s some connection to The Conjuring, and it’s a flimsy one beyond producers James Wan and Peter Safran. The titular doll also appears in one spooky sequence in The Conjuring, and this movie provides the backstory of how the doll got to be so mobile and evil. Director John R. Leonetti (director of Mortal Kombat: Annihilation and The Butterfly Effect 2) and writer Gary Dauberman travel back to 1967 in Los Angeles where medical student John Form (Ward Horton) and his wife Mia (Annabelle Wallis) are about to have a baby. John buys a porcelain Victorian doll as a gift for Mia to complete her collection, and things are fine until the cult members next door burst in and one of them — a young lady named Annabelle Higgins — bleeds onto the new doll while she’s dying. Uh oh. You just know that the doll contains the spirit of this cultist, and sure enough, strange things happen at every turn — enough to make the couple seek help and try to escape the doll’s bad mojo.

The film has a very claustrophobic feel with most of the action taking place in the couple’s home and Mia and John as the only characters for most of the screen time. Wallis shines in her believable performance as a frightened wife and protective mother after she gives birth. I don’t know if the movie was named after her, but her first name certainly suits it. John has a more indirect path to acceptance of the doll’s influence with some levels of skepticism and patronization of Mia’s concerns. Horton pulls this off and even gets to play the hero in some sequences. Two strong supporting actors fill out the cast beyond the two leads. Tony Amendola (Marco/Geppetto in Once Upon a Time) offers guidance to the troubled couple as Father Perez, and he’s perfect for this role with his gentle, avuncular nature. Alfre Woodard has always been one of my favorite actresses because she projects such warmth in every movie. Her character Evelyn owns a bookstore and befriends Mia as she looks for information on the occult and the spirit connected to the doll. Woodard’s presence in this rather standard horror flick gives it some class and elevates it.

Is Annabelle scary? That depends on what you expect. I give a lot of credit to the filmmakers for not filling the movie with pedestrian moments like cats jumping out of the shadows and loud noises on the soundtrack to make you jump as high as the cats. There are a number of chilling scenes and good special effects to support them. One particularly good, unique moment is ruined by the trailer, so avoid it if you can. You might expect the doll to pick up a knife and run around the house, but this is not that kind of evil doll movie. Instead, the spirit connected to the doll and some other spooks take precedence and are as much of a presence in the film as the doll itself. I was impressed with the increasing creepiness of the doll over the course of the movie. Pay attention to the condition and expression of the doll in various light and positions. You would swear that it moves even when you know that it didn’t. 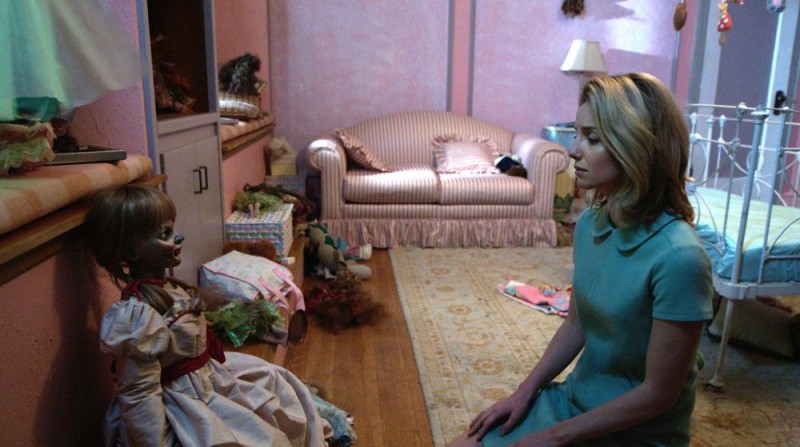 Although the doll in both Annabelle and The Conjuring has the same design, the real doll on which this story was based was a Raggedy Ann doll. I’m sure that there were licensing issues involved, and Raggedy Ann sales would go down if girls thought that their own doll might come to life or cause spooky events. Ed and Lorraine Warren investigated paranormal events as depicted in The Conjuring. You can see pictures of the real Annabelle as currently locked in a cabinet that’s not supposed to be opened if you check out the site devoted to the Warrens and their Occult Museum. I would have incinerated the stuffed monster rather than keep it around, but maybe that wasn’t an option.

Halloween is coming, so expect a lot of horror films between now and then. Music especially has a lot to do with the experience of seeing a horror film. I can’t imagine Halloween without its signature theme and score by director John Carpenter. With some extremely effective string sections, Joseph Bishara’s music kept me on the edge of my seat. Unfortunately, the best parts of his score play over the credits and lead you to think that there might be more coming afterwards. Nevertheless, I enjoyed sitting through the credits and listening to the music, and that doesn’t happen often. It’s tough to really frighten audiences, and this movie doesn’t quite get there as much as I had hoped. Annabelle is a good, solid horror flick, but it needs some more substance to truly bring it to life.