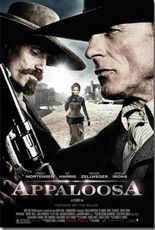 The second movie this week is the new western Appaloosa starring Ed Harris, Viggo Mortensen, Renée Zellweger and Jeremy Irons. This was quite an interesting experience from the very start. I can’t say I’ve ever seen a film quite like this. The dialogue is entirely unique and the repartee between Harris and Mortensen is something you have to see to understand. Frankly, it’s what both drives and makes the movie. Their characters have a symbiotic relationship that has been forged over years of working together that cannot be matched or upset.

They play “lawful” guns-for-hire brought into the town of Appaloosa to deal with a town local gone bad played by Irons. Mortensen looks amazing in the role and seems to have been transported directly out of 1880 for the role. He looks so good in it that it’s a bit disturbing for a while.

If there’s a misfire it’s in the casting of Jeremy Irons and the antagonist. He tries, but never fully succeeds, in using an old-West accent. As much as I like Irons he just doesn’t work here.

The story is decent but nothing to write home about. It’s a worthwhile investment and you’ll enjoy the unique nature of the movie even though it will leave you feeling a bit wanting at the end.