A small entourage joins a determined explorer in her latest adventure below the streets of Paris in As Above/So Below.

A young Lara Croft-like adventurer, Scarlett (Perdita Weeks), has spent years in search of the elusive Philosopher’s Stone — a chemical substance that can turn lead into gold and bestow eternal life on its owner. Her search has caught the attention of a documentary filmmaker, Benji (Edwin Hodge), who tags along to record Scarlett’s quest.

Her latest discovery leads them to an ornate headstone that contains several curious clues, including passages written in ancient Aramaic. Thankfully, her good friend George (Ben Feldman) is able to translate the text. Its contents point them to the famed Catacombs of Paris, where they enlist the aid of a local group of adventurers experienced with the intricate, maze-like tunnel system. Together, the six descend ever deeper into eerily uncharted territory far beyond their wildest expectations. 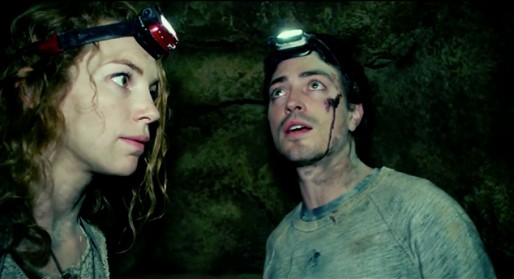 This is another found-footage story from a pair of brothers whose biggest mark on the industry to date is the entirely forgettable 2008 “horror” film Quarantine. This time around, the brothers give us a film that, at times, reminds the viewer of Tomb Raider, The Da Vinci Code and Raiders of the Lost Ark. Unfortunately, it manages to do this without ever approaching the level of quality of any of them. In the case of at least two of those films, that’s not exactly a very high bar.

As I’ve said recently, the found-footage gimmick has runs its course. This one gives us shots from at least three different unsteady head cams. Just show us the movie already. Scare us with a good plot that gets under our skin — not cheap scares that only work because we can’t see properly. It’s amazing to me that I have to point out that darkness is creepy regardless of the camera angle.

This is also a film where the writers seemed determined to break some sort of record for head-slapping acts of stupidity. Characters dive into murky water without any regard for their compatriots. They see things they should obviously point out, but they don’t. They barely even raise an eyebrow when something bad happens to one of their old friends. How pedestrian is the writing? Consider the example of George translating an Aramaic poem off the cuff, and it somehow magically rhymes in English!

The bottom line is that a horror film needs to make you feel uncomfortable and give you a good scare or two. This film’s lame attempts are not compelling, original or interesting. Bad actors wearing gaudy, contrasting makeup in creepy clothing is what I get for free every Halloween.