First I need to point out that I never read the book. Second, the theater I saw this at never mentioned it was Part I, of a trilogy no less.

Lord of the Rings this isn’t. 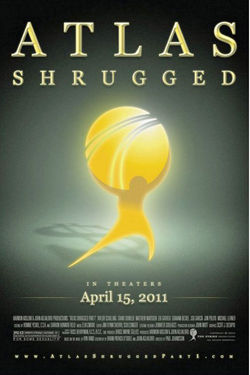 The film, from an incredibly dense novel from Ann Rand, revolves around the trials and tribulations of a pair of motivated business execs who are desperate to break free of the shackles of over-regulated and over-lobbied government interference just to provide a better product.

The story, as told here, is surprisingly approachable though tediously slow. It’s also very poorly acted and feels more like an overly-long made-for-TV movie that didn’t have much of a budget.

I watched and waited for something really compelling to happen. It finally did just as the credits rolled alerting me to this being a multi-part installment. For 100 minutes almost nothing of any real interest happened. We got rather unbelievable representations of socialists gone mad and it all felt very much like what I’d expect a Sean Hannity nightmare to look like.

It did poke at my attentions here and there. The lead female character is perky and not hard to look at and the lead male character is well built and has that permanent puppy dog look so you just know there’s going to be some sort of interplay there.

The main problem is that it’s all a bit of a blur. It felt like 100 minutes of film that I could relate, fully, in 20. Successful train transport company falls on hard times and causes rift in management styles between the owners (a brother and a sister) causing them to go in different directions while the owner of a steel company tries to help them with a new kind of steel the rest of the world is afraid will put them out of business all while random people vanish for no explained reason. There you go. That didn’t even take anywhere near 20 minutes.

I have some major doubts that, unless they’ve already shot the other two parts, we may never get them. I just can’t see how they could possibly justify it given the response this film is, deservedly, receiving.

I should also point out an odd irony about that. All the reviews are doing something I’ve not seen before. The reviewers are nearly unanimously panning the film while viewers are giving it very high marks (but still not seeing it). When I saw it the critics were at a 10% approval with the viewers at 91%. Very odd stuff—which I guess is fitting.