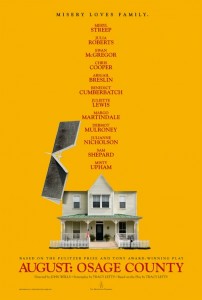 A dysfunctional family gathers together in a time of need, only to find more challenges than answers, in August: Osage County.

Many years ago, my grandfather shared with me a key piece of wisdom that, I’m embarrassed to say, I learned far later than I should have. I’d been struggling with some family dynamics, and in frustration, I expressed my belief that our family was broken. I began to tell him about other families that didn’t have our issues, and with a stern look I’d never seen before, he said, “Every family is broken in one way or another. Some just hide it better than others.”

On the surface, the Weston family seems pretty typical. The older Westons, Beverly (Sam Shepard) and Violet (Meryl Streep), live in the same big house they raised their family in. Unfortunately, Violet’s health is spiraling downward. She’s suffering not only from mouth cancer but also an addiction to several pain killers. It’s gotten so bad that Beverly’s decided to hire a live-in caregiver. When he suddenly goes missing just a few weeks later, the rest of the family begins to drop in to help support Violet.

What starts out as a fairly simple story about a troublesome patriarch slowly unfolds into a maze of deep family intrigue and scandal. Everyone, it seems, has their own cross to bear, and Violet appears intent on making sure they all feel its full weight. 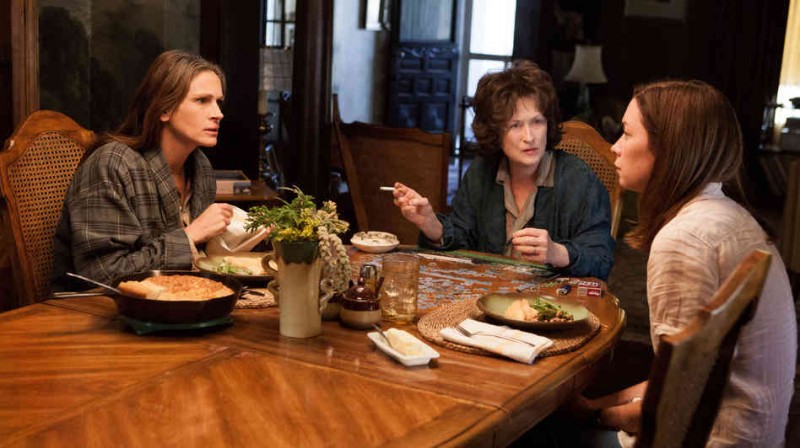 There’s no way to avoid the sheer massive star power of the cast. The movie poster could barely fit them all in. If anything, it’s initially a bit distracting. In addition to Streep and Shepard, we have Julia Roberts, Ewan McGregor, Chris Cooper , Juliette Lewis — sorry, I need to take another breath — Abigail Breslin,  Dermot Mulroney and Benedict Cumberbatch to round out the biggest names. Surprisingly, while all of them are wonderful, I felt that the two most captivating performances came from the lesser-known Margo Martindale as Violet’s sister and Julianne Nicholson as one of Violet’s daughters. Streep and Roberts get the big scenes, of course, and few actresses can make an entrance like Streep. Her Violet is the embodiment of lightning in a bottle. Once the cap comes off, run for the hills. Shepard, for not being on the screen all that much, makes the most of it, including a momentary shot that left me haunted.

The script drips with family interactions that are deliciously real. Violet commands control with biting psychological warfare that flattens the landscape around her as everyone scurries for cover, praying for an end to the incessant barrage. The rest of the family, long victimized by the attacks, have learned to make the best of a bad situation, going on with their lives the best they know how.

Though a bit slow to get rolling and a bit melodramatic at times, this is a stealthily sentimental, brutally honest film that exposes the truth lurking just behind the not-so-opaque curtains for more families than we care to admit.