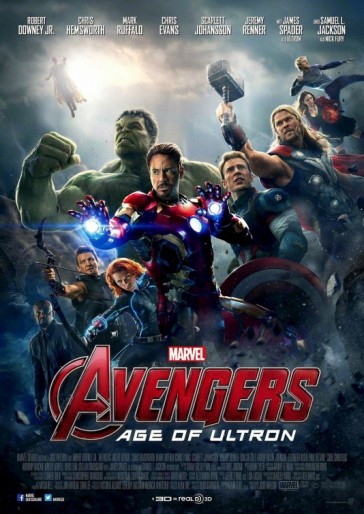 Marvel is really on a roll these days. Moviegoers and fanboys alike anticipate every film in the Marvel Cinematic Uinverse, even this summer’s Ant-Man, a character who never would have made the transition from comic book to silver screen prior to this heightened interest. Avengers: Age of Ultron kicks off Phase 3 of the Universe and reunites the characters who have been off by themselves in their own series for an attempt to strike gold again as with 2012’s The Avengers. There’s a lot to like about this sequel. In some cases, too much of a good thing can be misconstrued as unfocused. When I left the theater, I had that impression — a lingering desire for restraint instead of shoving everything into one movie. Despite the kitchen sink approach, Avengers: Age of Ultron is fun, entertaining and the perfect bridge to the next batch of Marvel films that will lead, of course, to the next two Avengers films.

The seemingly simple plot is actually a well-constructed path by writer/director Joss Whedon that leads to the final shot of the film and the stories yet to come. Arrogant Tony Stark (Robert Downey Jr.) thinks that he can protect the world with a global defense system and uses one of the Infinity Gems found in Loki’s scepter to complete his system. Unfortunately, this act also unleashes the titular Ultron, an artificial intelligence who forms its own indestructible body from Stark’s cast-offs and takes on The Avengers. Lots of character advancement and beautiful little moments take place in between the battles, and that’s where the heart of the film lies.

If you want to know the pecking order of importance in the film, look no further than the poster. The central characters are Tony Stark/Iron Man, Thor (Chris Hemsworth), Bruce Banner/Hulk (Mark Ruffalo) and Steve Rogers/Captain America (Chris Evans). Natasha Romanoff/Black Widow (Scarlett Johansson) and Clint Barton/Hawkeye (Jeremy Renner) are there with the foursome every step of the way. James Spader provides the deliciously evil voice of Ultron, and I can’t remember enjoying voice work that much since Andy Serkis — also in this film with tons of other actors — as Gollum. Spader has had a resurgence in recent years with Boston Legal, The Office and The Blacklist (one of my favorite shows), so the cadence of his voice and tasty delivery of lines so perfectly supported by the writers of The Blacklist get a similar treatment here. Twins Pietro Maximoff/Quicksilver (Aaron Taylor-Johnson of Kick-Ass) and Wanda Maximoff/Scarlet Witch (Elizabeth Olsen) have their full introduction here, and for my money, these interesting characters didn’t get enough screen time.

This gets back to my point. Had Whedon hung his entire film on the handful of characters above, it would have had more weight and there would have been more room to explore their individual stories. Instead, Avengers: Age of Ultron becomes a cavalcade of cameos with some expected characters like Nick Fury (Samuel L. Jackson) popping up when needed and many others from each of the four main characters’ individual franchises appearing when least expected. This approach elicits lots of oohs and aahs from the audience, but a lot of these characters really don’t need to be in the movie. Fortunately, some of the best moments are between Bruce and Natasha or Hulk and Natasha, and after watching Avengers: Age of Ultron, both characters deserve their own movies. I don’t see them in the list of future Marvel movies, and I hope that enough interest causes this to change. Have no fear. Stan Lee makes another one of his (probably contractually required) cameos. At this point, the humor and variety of Lee’s cameos surpass even those of Alfred Hitchcock’s.

The special effects are as extravagant as you would expect in a superhero movie. Unfortunately, there are plenty of times when I couldn’t tell what was going on in front of me, and that’s when you’ve hired too many special effects houses to finish your movie. I had this same problem with Transformers: Age of Extinction. Just because you can throw a thousand pieces of debris in one frame of film doesn’t mean that you should. In fact, many of the simpler effects like the red wisps of smoke from Wanda’s magic, Hulk’s transformations and the visual representations of artificial intelligence are more impactful and memorable than the overload of things flying past the screen in the midst of battles. The best fight scene in the movie does not involve Ultron, and that’s all that I’ll say. All of these massive battles point to a film that I dare Marvel to make — Damage Control, the organization that cleans up after superhero destruction. This single film could intersect with almost every Marvel film. I’ve now thrown my gauntlet down.

Don’t fall into the 3D or IMAX traps, either. I saw the movie in IMAX 3D, and it had nothing that really commanded either add-on. It would be much more enjoyable to see the film with all of its glorious colors and visual tricks in a regular-format theater with a big screen. Unless films are designed or made specifically for 3D or IMAX formats, they are just ways to steal moviegoers’ money. I love my local IMAX theater because of its sound system, so I’ll see movies there when possible. On the other hand, I hate 3D. I wish it would just go away entirely. If someone would make a movie as immersive and good as the 3D version of the IMAX countdown, I’d be sold. Even Avatar didn’t go that far.

You have to hand it to someone at Marvel for plotting out all of the films in the Universe and somehow stitching them all together with references back to each other and credits scenes that tease at future films. Avengers: Age of Ultron serves as both the culmination of stories from others films and the jumping-off point for the next ones. That is why there’s such a cluster of characters, facts and incidents. Whedon might give someone a moment or two just to get them on the way to the next adventure. I think of the Avengers movies in video game terms, and I’m not being facetious. If you look at the layout of Marvel films over the years, it makes sense. In series like the Super Mario Bros. games, there are common levels that lead up to the final level of a world. All of the common levels are good on their own, and the final level finishes off that world with what you know from the previous levels and acts as the gateway to the next world. The Avengers movies are those final levels with each Phase of the Universe another world. 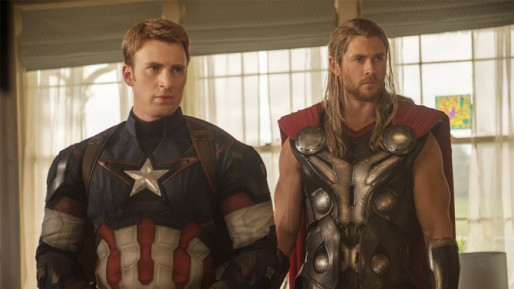 I still think that The Avengers is the best superhero movie so far. It got everything just right and showed what a team of superheroes can do when they work in perfect synchronicity. Iron Man 3, Guardians of the Galaxy and Captain America: The Winter Soldier are also on that level of excellence. They make you say “Wow” when you leave the theater. I only thought “really good” when I left Avengers: Age of Ultron. I enjoyed it; I just wasn’t blown away. I’ll make one more analogy, and then I’ll shut up about it. Do you know what fondant is? It’s the creamy, somewhat edible confection sort of like thick icing that bakers and cake designers use to create shapes and forms on top of cakes as it hardens. The cakes themselves are tasty and impressive enough without the additional layer of fondant, which honestly has a bland taste. This movie seems to have an extra layer of “stuff” on top of it like fondant that I would scrape off to reveal the much better base and filling. It’s purely a matter of taste, and the cake looks and tastes good for almost everyone in the end.

The summer really kicks off with this release, and it’s probably already breaking records as I write this review. I’m still thinking about Hulk and Natasha, and those lingering impressions prove that Whedon did a lot right. Humor and camaraderie are mixed in throughout, and the running jokes about Thor’s hammer kept me giggling. Little touches like the use of a song from Pinocchio — Disney now owns Marvel — are masterful and really had me on the edge of liking this film more than I did. It will be a long wait until the next Avengers movie, so I’ll probably return to this one a few more times. For now, Avengers: Age of Ultron revels in all things Marvel once again and establishes multiple meanings of “Hulk Crush!”