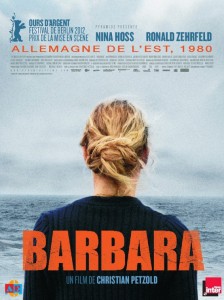 There’s nothing wrong with a slowly paced film as long as it builds to something exciting or dramatic at the end. There are many examples of films that reveal information in dribs and drabs over the course of their plots, and it turns out that the slow approach is the way to go with these stories. Imagine how different The Sixth Sense would be to watch if you knew the truth about Bruce Willis’s character earlier. The clues that lead to that revelation are dropped carefully like bread crumbs throughout the plot. Similarly, Barbara has a trail of clues that offer great promise but then don’t deliver with a payoff that’s worthy of your patience. Great acting and pacing still manage to keep it from being a bore.

Writer/director Christian Petzold (also writer/director of Jerichow and Yella) sets his story in 1980 East Germany. People are very wary of the powerful Stasi — the secret police of the German Democratic Republic (GDR), informally known as East Germany. The Stasi seem to be everywhere, and they often barge in without notice and look for signs of crimes against the state. Barbara very much has the feel of The Lives of Others if that wonderful film’s characters were transferred to the country instead of Berlin. In a way, that’s what’s happened. German actress Nina Hoss takes the titular role in her fifth film with Petzold, including Jerichow and Yella. Barbara Wolff (Hoss) is a talented doctor who was punished by banishment to a small pediatric hospital in the country when she applied for an exit visa from the GDR. To make things worse, the Stasi are constantly at her door under the direction of officer Klaus Schutz (Rainer Bock), a weaselly kind of guy who seems to delight in searching Wolff’s apartment or stopping her on the road.

Wolff has some people in her life who make it worth suffering through the invasions of privacy and acts of humiliation. Andre (Ronald Zehrfeld) is the head doctor at the hospital. He takes a liking to Wolff when other doctors and staff avoid her. At first, he offers her rides to and from work, but he later gives her a bicycle to provide her some independence and prevent her from having to walk everywhere. Wolff also has a lover named Jorg (Mark Waschke) who meets her in dense woods and wherever else they can spend some quality time. Jorg has a plan to help Wolff escape to the West, and many of the details of the film relate to this plan, whether it be hiding money in a stove or not letting others like Andre get too close. Wolff also has a soft spot for new patient Stella (Jasna Fritzi Bauer), who clearly needs extra help for her variety of problems. These people keep Wolff alive in ways they don’t even realize and allow her some room to dream of a better life.

Barbara succeeds for two major reasons: Hoss’s magnificent performance and the way that Petzold imbues the movie with a lived-in feeling and day-to-day details. Hoss has almost a hard look to her even though she’s quite attractive. She hardly smiles, and her eyebrows are so defined that their lines almost descend to her eyes. The excellence of her performance is that it’s so understated and calculated. Any further emotion would ruin the part. Wolff’s wardrobe doesn’t vary much, but she almost always wears the same reddish-brown shoes that are one of the few colorful things in her life and stand out on one of the movie posters that way. Wolff’s routine is both normal for a country doctor and secretive for the things she does to make way for her new life. She meticulously hides money when she gets a chance and buries any other clues about her future plans. When Schutz comes knocking, Wolff doesn’t bat an eye when the officers tear her place apart and pretty much assumes the position up against the wall for the humiliating body search by Schutz’s female assistant without any protest. Wolff’s only happiness comes when she meets Jorg in a hotel, but that’s even tinged with melancholy because of the danger she has to endure to reach the hotel while avoiding the Stasi.

Petzold filmed Barbara in chronological order — a technique that must make it easier for actors to emote because their characters are growing as much as their experiences on the set. Barbara requires patience of moviegoers, and it draws you in as you view Wolff’s life like a fly on the wall. There’s an ending of sorts for Wolff’s story, but there really should be something more as a resolution of events. Without further events or even plot twists, the movie feels rather empty and anticlimactic. This is a disservice to the actors who made it believable. Some more depth could have easily been mixed in to fully develop Barbara into a better film. As it stands, it’s still good and further proves why Petzold and Hoss should continue to work together.