A doctor living in East Germany in 1980 is forced to endure the humiliation of working in a remote low-tech hospital in Barbara. 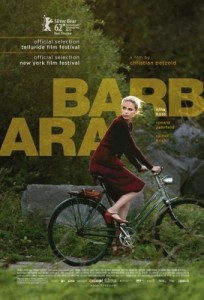 Barbara is the kind of film artsy reviewers love but that challenge many viewers to comprehend why. It’s billed as a political and psychological thriller but will elicit little sense of either in most audiences. The story revolves around, of course, Barbara who’s a polished physician that’s done something wrong to draw the ire and continued eye of the government. This is pretty close to the last thing you want in 1980 in East Germany. What she did wrong isn’t exactly made clear (a problem that will surface at least a few times in its 105 minutes). The bottom line is that we’re told she spent time in prison which ruined her entire social circle and is now sentenced to endure life in a lousy government-assigned apartment in a boring out-of-the-way hospital with a staff that pales by comparison — or so it seems.

The leading doctor is a good looking fellow who immediately takes interest in Barbara — interest that she’s clearly not in tune with. The story progresses with lots of small details left to the viewers imagination. Little by little plot points come into focus. However, prepare to spend the first two-thirds of the film entirely unsure about the direction of the story. Once it does crystallize, only then will you have enough to gain your interest in the main story line. This could have all been assisted by a few key spoken sentences of explanation but those explanations never come. For example, a huge part of the plot involves hard dates and times but we’re not given any sense of the current day/time in order to know how tense we should be about the current situation. It’s like knowing you’re going to die on Tuesday but having no idea what Tuesday. Tomorrow? Next week? Next month?

The leading doctor’s back story is a somewhat minor subplot that seems far more interesting but, again, it’s left largely untouched leaving us in the dark for no good reason.

The acting is is superb and the look and feel of the film is spot-on transporting the viewer to a solid representation of the repressive experience of living in East Germany at the time. However, that doesn’t make for a winning movie experience. For a thriller I expect to be …. shall we say, thrilled? This patient exhibits  just the faintest pulse that only quickens at the very end during a rather unsatisfying final act. Much of story is painfully predictable and, when it’s not, it’s infuriatingly vague or unnecessarily confusing. Characters drop out of the sky like large rain droplets on a brightly sunny day. You’ve got no idea where they came from or why you’re suddenly all wet and yet, there you stand, soggy and confused.

Other films have covered similar territory much more effectively. If all you want from a film is a great look and great acting then this is your lucky day. Barbara, however, delivers everything a thriller needs except the key element that provides the thrill.