A world champion tennis star takes on the biggest challenge of her era in Battle of the Sexes.

Billy Jean King (Emma Stone) applied a laser-like focus in achieving her goal to become the best tennis player in the world. That single-minded dedication came in handy when she decided to launch an entirely new women’s tennis association. The genesis behind that effort came with the realization that the United States National Lawn Tennis Association paid its women pros an eighth of what they paid the men, even though both sexes drew the same audience size.

As King set about bringing equality to women’s tennis, a larger issue loomed on the horizon. Bobby Riggs (Steve Carell) — a 55-year-old ex-tennis champ, avowed hustler and gambling addict — concocted a crazy scheme to make some quick cash. He found sponsors who agreed to offer up a payday for a match between Riggs and any top woman player willing to accept. Riggs boasted that women players were inferior to their male counterparts and would crack under the pressure of playing a man, even a washed-up older one. Shockingly, few people at the time, including many professional women players, thought that his comment was a boast. Men and women alike generally accepted the view that women were better off limiting their efforts to the kitchen, the kids and the bedroom. As the tempest around the issue rose, King found herself drawn into the fray and determined to settle the point once and for all.

The oddest thing about this film is that it’s a wholly different experience than you might expect, especially if you haven’t seen a trailer for it. This is not the typical Steve Carell farcical comedy. It’s not even really all that interested in Riggs as a character. This is really King’s story of coming to grips with not only her place in the tennis world, but also her own growth as a human being. Therein lies its biggest weakness.

The film focuses heavily on King’s unplanned love affair with another woman (played flawlessly by a doe-eyed Andrea Riseborough), but doesn’t seem to know how best to present it. It has the effect of essentially splitting the film into two entirely different vehicles. At times, the love story is painfully slow with far too many shots lingering beyond any usefulness. When it switches over to Riggs, we can feel the entire film switch into a different gear. Everything speeds up, snapping perfectly into place and drawing us along for the ride until it recklessly slams on the brakes to careen back toward the love story. This back and forth really takes a toll early on, but then something magical happens.

As the match draws near, King’s character undergoes an on-screen metamorphosis. She becomes Rocky preparing to take on Apollo Creed, and the entire film lifts up with her. The match itself has all of the trappings of a major championship boxing match. Every shot plays like a well-placed jab followed by a devastating uppercut. We’re glued to the action, forgetting nearly everything that came before. It’s hard to believe that what we’re watching is a re-creation. As the match comes to a close, we’re brought to cheers and tears in equal measure.

Battle of the Sexes is far from a perfect film, but its poignant reminder of a lesson that we still haven’t fully learned is well worth the struggle. This one takes the trophy, 3 sets to 1. 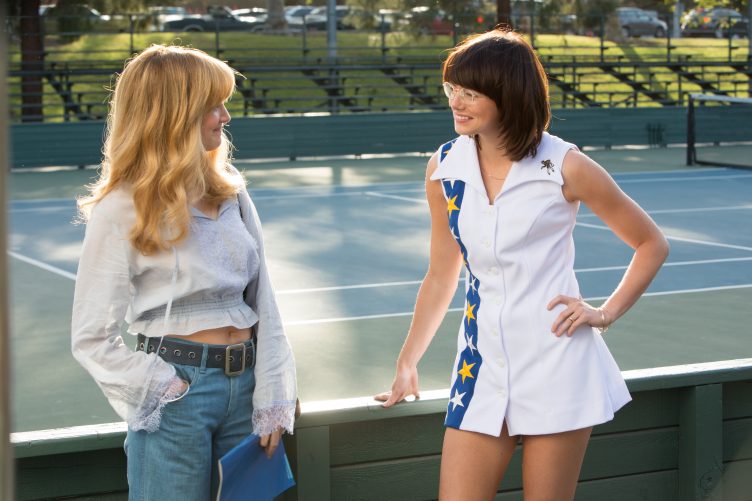