Beautiful Creatures is a supernatural story involving two main characters—Lena Duchannes (Alice Englert) and Ethan Wate (Alden Ehrenreich)—who are drawn to one another in more than the typical ways usually associated with love affairs.

The supporting cast is top-notch including Jeremy Irons as Lena’s overprotective uncle, Emma Thompson as her mother, Viola Davis as the town librarian with a secret and Emmy Rossum as Lena’s estranged cousin. 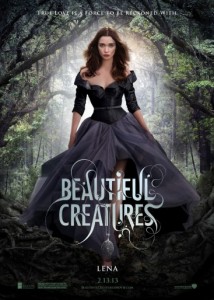 The main story focuses on Ethan—a typical high school senior getting ready for college anywhere away from their small South Carolina town. Then, into class one day comes Lena whose family is the talk of Main Street and has been for generations. The religious, sleepy, conservative community is certain the family is evil. They’re not but that’s not to say they’re not different. They’re all part of a species known as Casters. They’re similar to, but not quite the same as (we’re told), witches. That’s going to be one hard burden to carry into a romance of course and, just as predictably, none of her family see anything good in a caster falling for a mere mortal.

From the first frame on the story seems like a blatant attempt to jump onto the Twilight bandwagon.

The main issue with the film is that it’s trying desperately to walk the tightrope of campy/funny and failing. The heavy hitters here all fare pretty well. Emma Thompson really shines (and frankly looks incredible in her early 50’s). The script is just allergic to any sort of positive sorcery. When it tries to be funny every joke lands with a dull thud.

There were moments. Englert shows promise while Ehrenreich is pretty forgettable. The effects are terrific and the story, when it’s good, is rather interesting but not enough to ever conjure a way to get off the ground.

Stay tuned as there are, I understand, four books in the series this is based on and it was clear from the story and its ending that more are on the way—assuming this does any sort of business at all. I just don’t know if anyone will care.