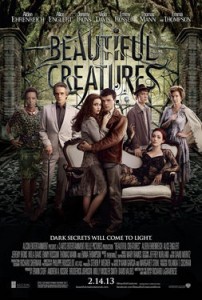 I was afraid that the success of the Twilight films would lead to a rash of adaptations of other young adult supernatural series to the big screen. Hopefully, Beautiful Creatures will put an end to any plans beyond what’s already in production. This ambitious film with great production values falls flat for a number of reasons. It has an identity that’s a cross between The Munsters or The Addams Family and the Twilight films. I don’t know which franchise came first and what influenced the book series on which this film and possible future sequels hang their hopes. Despite the lack of sparkly vampires and giant werewolves, Beautiful Creatures feels like Southern fried Twilight.

Writer/director Richard LaGravenese previously adapted P.S. I Love You and Freedom Writers from novels. The story goes that he approached this film version of the novel by Kami Garcia and Margaret Stohl in their Caster Chronicles at the urging of his children, who were fans of the series. I hope that they’re happy with the result because I bet this is a case of the book being better than the movie. Ethan Wate (Alden Ehrenreich) lives in dead-end town Gatlin, South Carolina, and dreams of escaping as soon as he can go to college. He lives with his father, but his main caregiver is mystic/housekeeper/librarian Amma (Viola Davis). When new student Lena Duchannes (Alice Englert) shows up in his classroom, Ethan is smitten whereas the rest of the class is terrified because it seems the whole town knows that there’s something evil about the secluded Ravenwood Manor and its inhabitants. That kind of dynamic really doesn’t work for me because you would think that the town would essentially raise their pitchforks and torches to drive out these people if they knew that they were witches, uh, “casters.”

The crux of the story is that Lena is almost 16 years old, and on her birthday, she has to undergo the Claiming of her soul for the dark side or the light side. Various relatives try to influence her decision. Patriarch/uncle Macon Ravenwood (Jeremy Irons) and Amma want her to be nice, but mother Sarafine (Emma Thompson in a dual role) and cousin Ridley Duchannes (Emmy Rossum vamping it up) push her to be evil. Other family members that figure less prominently in this story are Gramma (Eileen Atkins with purple hair), Aunt Del (Margo Martindale in weird costumes) and Larkin Ravenwood (Kyle Gallner). Ethan throws a wrench in the works by falling in love with Alice and receiving her passion in return. The whole family seems against this romance with a mortal, but Ethan and Lena go ahead blindly anyway. This plot has been done before, and the whole thing kind of reminds me of the recent Broadway musical of The Addams Family.

This story might all work if it doesn’t feel so forced and silly. Englert is really the bright star in this cast, and it’s clear why she won the role of Lena. She has a great career ahead of her. Unfortunately, Ehrenreich plays his role like a better-looking Gomer Pyle with a heavy “aw-shucks” accent to boot. Why would a young lady with caster powers take a second look at Ethan? LaGravenese brought together a great cast, which also includes Pruitt Taylor Vince as teacher Mr. Lee and Thomas Mann as Ethan’s friend Link, but most of them seem to be overacting, especially Rossum and Thompson, whose second role is as bible-thumping Mrs. Lincoln (Link’s mother). I think the goal was to cast for multiple movies, but I doubt that the poor box office returns will green light another film.

I really wanted to like this film more and looked forward to seeing it more than any other movie this week. The production design and sets are fabulous from the interiors of Ravenwood Manor to the beautiful trees and greenery of the locations. The special effects are a believable mix of CGI and physical effects like a spinning dinner table that‘s the focus of one important sequence. Costumes, makeup and hair are all well done, but all of this fantastic work only tends to put lipstick on a pig. The original score for the film was produced by Dhani Harrison and his band thenewno2; this music is one of the positives for the film. The good and the bad aspects of this production tear it apart much like the forces of good and evil grab at Lena’s soul. The smart characters want to get out of Gatlin as soon as they form an escape plan. It’s much easier for you to walk out of the theater and not look back.