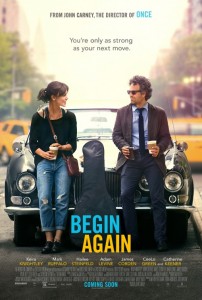 A burned-out music producer and forlorn songwriter work together on a new album, bringing them peace and passion in Begin Again.

New York City is no stranger to countless untold rags-to-riches stories and nearly as many rags-to-riches-to-rags stories. Dan Mulligan (Mark Ruffalo) hopes to be one of the few that can turn the corner, adding a final, emphatic “riches” tag to the cycle. His meteoric rise led him from obscurity to heading up one of the most respected independent record labels in the country. The fall began over the last few years as an out-of-control lifestyle eroded his skills, dulled his senses and drove his longtime partner (Mos Def) to dump him from the company they founded together.

As the seriousness of his situation begins to settle in, Dan copes, as he has so often, by drowning his troubles in booze. He stumbles into a local bar where, through a liquored haze, he hears a melody that he instinctively knows is a winner. It comes from a meek, unassuming woman reluctantly plucking out the tune alone on her modest guitar. Dan swaggers over to introduce himself to Gretta (Keira Knightley). She explains that she’s just been dumped by her longtime boyfriend Dave (Adam Levine), who’s just signed a huge record deal with a major label. Dan tells her that he can make her a star, but Gretta sees herself as a behind-the-scenes songwriter — not a performer. With a bit more convincing, they agree to collaborate on a live record, using the streets of New York City as their soundstage. 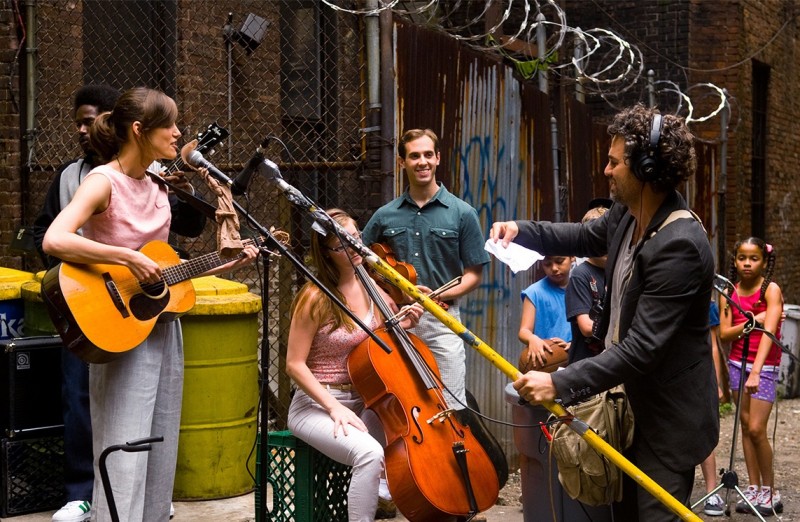 Writer/director John Carney knows how to produce a music-centric film, having previously written and directed 2006’s highly-regarded Once. It took home the Oscar for best original song. His latest film opens with a jaw-dropping, aurally hypnotic number sung by Knightley herself. It’s the first in a series of flawless songs that add up to the best soundtrack of the year. Unfortunately for Carney, it proves to be a soundtrack in search of a movie.

Early on, the story disturbingly bounces around, always returning to the magical opening song at the bar, but it’s not always clear when it’s happening. Carney also seems to have struggled with the relationship between Gretta and Dan. Gretta loves her ex, Dave, and Dan still seems to want a reconciliation with his ex (Catherine Keener). We’re awkwardly teased with the idea of the two of them as a romantic couple, but their complete lack of any chemistry and the story arc refuse to let it be. The supporting cast, including Hailee Steinfeld and James Corden, is superb but underutilized.

There are some very nice, tender moments along the way, but they’re not enough to keep the film from feeling overly long. This beautiful soundtrack for New York City will melt your heart every time it returns to the microphone, but it leaves you to slowly fade into quiet, unwanted repose between the numbers.