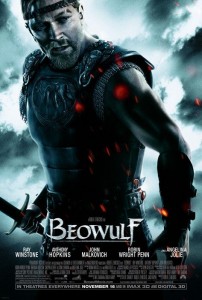 Just got back from seeing Beowulf in digital 3D. The first thing I noticed was that the digital presentation was much better than I anticipated. Everything was pretty flawless though the edges of the screen lacked a bit for brightness. I’ve had concerns about resolution (jaggies) and other issues but they were all pretty much put to rest with this experience.

As for the movie specifically, this was a compelling re-imagining of the classic story. Most of the reviews have focused entirely on the technology and suggesting that the story is rather lacking. I think that’s a bit overstating it. While this new twist on the tale isn’t destined for an Oscar, it’s also fairly entertaining in its own right.

Obviously I spent much of the movie marveling at the technology but not so much that I wasn’t kept interested by the story.

You’ll find solid performances from Anthony Hopkins, Ray Winstone, Robin Wright Penn, Angelina Jolie and Crispin Glover among others. The soundtrack was handled admirably providing just the right flourishes where appropriate and disappearing into the background when the foreground demanded attention.

As far as the technology, this movie presents it wonderfully. It dazzled me time and again and made me think of all of the potential this will present to future filmmaking  That said, it certainly wasn’t without its issues. Some scenes looked photo-realistic while others looked, quite simply, wrong. Character portrayals were hit-and-miss. Most of the body now seems perfectly animated while the eyes and movements of the hands still remind you that what you’re seeing isn’t real. Robin Wright Penn’s character never once looked real to me. Her eyes were continually unrealistic. Things really looked basic when anyone rode a horse and snow went from looking flawless to looking like a bad 1960s cartoon rendition.

Even with those concerns I’m glad I saw this. It was certainly entertaining and technically thought provoking. There was nothing to complain about regarding the 3D except for the low quality of the “free” glasses. If this catches on I’ll have to buy a more permanent personal pair somewhere. I can’t wait to see what the future holds.