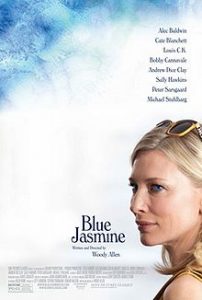 Woody Allen‘s latest film bounces between New York and San Francisco as it follows a one-time wealthy socialite who has to come to terms with her new, less fortunate, reality in Blue Jasmine.

Jasmine French (Cate Blanchett), is an invented name as fake as the person who created it. Jasmine has always seen herself above the rest of us. Adopted into a lower-class family, she created the person she wanted to be and simply willed that person into existence. All her dreams came to pass when she married a wealthy real estate mogul (Alec Baldwin) and moved into a lifestyle she always knew was her calling. Hers was a life of privilege filled with attending charity events, hobnobbing with the rich and famous and traveling the world wrapped in the latest couture.

When it all comes crashing down, she finds she’s totally unprepared for a normal life — holding down a job and interacting with everyday people. The thought of it is just too much to bear. She’s forced to move in — temporarily, she hopes — with her less sophisticated sister who holds down a normal job and lives in a nice apartment in San Francisco. Of course, it’s all too common for Jasmine, who can’t believe she has to endure this kind of torture. 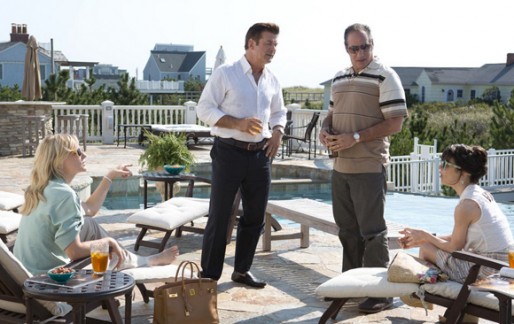 The film presents the story in a series of flashbacks between Jasmine’s past life in New York and her present life in San Francisco. The impact of that transition has made Jasmine a bit neurotic with episodes of losing touch and talking to people who aren’t there. She’s also the type of person everyone hates. She can’t help but tell everyone else how bad their lives are while ignoring the obvious hypocrisy of her own situation. She never quite gets that the one constant in all her bad relationships is her.

As is typical for an Allen film, the acting is superb across the board. Blanchett moves from sophistication and elegance to pathological and unappealing with surprising deftness. Baldwin, as her husband, has an easier time but plays it exactly as needed. Sally Hawkins injects the polar opposite sister with the perfect mix of ignorance and compassion. Add to this some nice performances by Andrew Dice Clay (seemingly from out of nowhere), Louis C.K. and Peter Sarsgaard.

That’s where the fun ends. The story itself is bland and unimaginative. It doesn’t have any of the typical Allen magic so prevalent in most of his films. The running time is just 98 minutes, but it feels more like several hours. Then, out of nowhere, the film ends in a totally abrupt and entirely unsatisfying final scene that leaves the audience cold. I’ve never walked out of a more quiet Allen film.