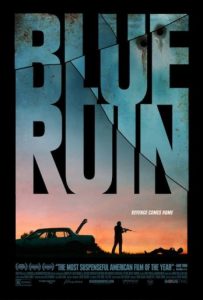 A homeless loner turns to vigilante revenge when his parents’ killer gets an early release from prison in Blue Ruin.

There’s something not quite right about Dwight Evans (Macon Blair). This is not your typical lost soul of society. He breaks into homes to take baths and enjoy some cable TV before returning to solitary afternoons on the beach and meditative evenings in his nearby dilapidated car. When the police arrive early one morning, we’re surprised to find them seemingly sympathetic. We sense a history and realize that they know not only the man but also the source of his demons. His parents were brutally murdered by a backwoods thief, and the police are there to inform Dwight of the perpetrator’s early parole courtesy of an unexpected plea bargain.

Dwight’s foggy, meandering existence suddenly comes into crystal clear focus. The murderer must pay the ultimate price for his sins, and Dwight will be its deliverer. He immediately sets about planning his vengeance and confronts the killer on the very day of his release. The die, now cast, exposes Dwight and the remainder of his family (a sister and her children) to the wrath of a hillbilly clan devoid of any morality. It’s now a simple matter of who will prevail as the hunter over the hunted. 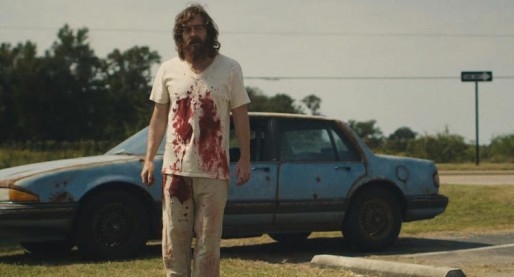 Blair gives the audience a fantastic performance as the improbable lone-wolf crusader. The rest of the film would not stand a chance if not for his eccentrically quixotic portrayal. It’s like watching a mouse try to comprehend trigonometry and haphazardly succeeding from a mix of pure effort and dumb luck. The result is, at once, chilling, stressful and humorous. Writer/director Jeremy Saulnier gives the film the perfect look and feel. Its harsh lighting and no-frills style only add to the disconcerting, erratic ambience. Saulnier pulls no punches when it comes to the sheer rawness of the struggle. Even those of little means can be quite inventive when so singularly dedicated to a cause.

It’s the script that loses connection with the rest of the effort. The power and effectiveness of its earlier scenes are deflated by a series of highly implausible plot choices. The writing also falls short on some critical details. A prime example is Dwight’s classmate and recent war vet friend (Devin Ratray), who not only looks too unfit to have been the mercenary he portrays but also doesn’t have the right dialogue to convince us of his abilities.

What results is a highly uneven effort that bounces repeatedly between tense thriller and unintended comedy. It strikes me most as an imperfect first step on a career path that has a gem hiding just beyond the horizon. This isn’t that gem, but I look forward to what comes next.