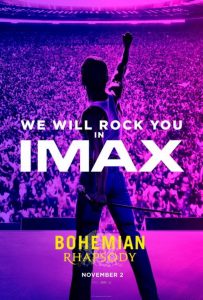 The best movies about musical acts or the music industry always feel authentic. Involving both real and fictional acts, the top films include Ray, Once, This Is Spinal Tap, The Blues Brothers, Almost Famous (of course!) and even the documentary Anvil: The Story of Anvil. That’s the level of quality that I expect from a biopic or fictional story that focuses on musicians. Legendary rock band Queen and their amazing singer Freddie Mercury were due for such a treatment on the big screen. A long list of hits and a performance at Live Aid that everyone saw required a deep dive into the story behind this music. Unfortunately, the resultant movie doesn’t deliver the goods. Bohemian Rhapsody squanders the legacies of Queen and Mercury for a tedious experience that made me cringe more than applaud or smile.

The biggest problem concerns the focus or direction of the movie. Because it opens with part of Queen’s performance at Live Aid, is this all meant to be about the events that led to this famous set? Is this a history of Queen or a biopic of Mercury? Maybe it’s about the creation of the titular song? The answer is that it attempts all of those things and achieves almost none of them well. I would rather that the story center completely on Mercury. Writers Anthony McCarten and Peter Morgan both rank as skilled screenwriters in their own right with McCarten’s last two gigs being Darkest Hour and The Theory of Everything. Director Bryan Singer and the writers throw everything in the blender and hope that audiences choke down the resultant smoothie made of elements that really don’t go together.

Starting with Mercury (Rami Malek) as a young man finding his place in the local music scene, the narrative bounces between the formation of Queen and Mercury’s relationship with lover and friend Mary Austin (Lucy Boynton). Queen consists of Mercury, Brian May (Gwilym Lee), Roger Taylor (Ben Hardy) and John Deacon (Joseph Mazzello of Jurassic Park). Montages and musical interludes tell one version of the history of the band, and perhaps much later than it should have been, Mercury’s sexuality receives some attention in the form of clichéd hook-ups and the introduction of longtime boyfriend Jim Hutton (Aaron McCusker). This juggling act all leads up to the six-song Live Aid set that bookends the movie.

Malek ranks up there with the best transformative actors, and his superb work here deserves all of the accolades that it has received. Malek easily dons the clothes and hairstyles so that he gets as close as any actor can to Mercury’s persona. Fortunately, Malek did not sing in the film and instead lip-synched to recordings of the lead singer. Lee, Hardy and Mazzello also get the looks and mannerisms of their characters right, so the main cast, including Boynton, saves this from total failure. Tom Hollander portrays band manager Jim Beach as a steady presence throughout the story, while Mike Myers distracts with his few minutes of screen time as a record producer.

There are too many historical inaccuracies and outright bad decisions that I can’t cover them all here. Executive music producers May and Taylor insert Queen music wherever they can over montages, and that music didn’t actually exist at that point in time. Remember my blender analogy? For example, a montage of Queen touring America is set against “Fat Bottomed Girls,” which perhaps fits the idea of touring but didn’t come out until years later. Mercury sadly died of AIDS, and that demise and his homosexuality are mostly glossed over, which is surprising coming from Singer. Instead, we get a couple of scenes of Mercury longingly looking at other men and a perhaps insulting stereotypical bit in which he follows a trucker into a gas station men’s room. For a film named after a song, you would think that you get to hear that complete song in the movie. Not quite. The studio segments about the creation of the song are hokey, the band only played part of it at Live Aid and Wayne’s World pays more homage to the song than this mess. Awful dialogue and clichés like Mercury coughing up blood into a tissue further ruined my interest. It’s ridiculous to believe that Mercury with just his driver spent time looking for Hutton on the day of Live Aid prior to the concert. Their manager would control his every movement that day. The virtue signaling of insert shots of people of every color and religion at the Live Aid concert belies the real makeup of that audience; Singer should have just used real footage as he did with the crowd shots.

I would be remiss to not mention the awful prosthetic teeth for Malek that could have derailed his performance. I never noticed that Mercury had bad, protruding teeth until I saw this movie. I went back and looked at videos, and even in them, it wasn’t so obvious. I have to call out the awful work by Chris Lyons because those teeth miss the point about using prosthetics. In old vampire movies, the fangs looked fake because they fit into the mouth over the actors’ existing teeth. Malek’s teeth seem to be that kind of setup, and it looks ridiculous because the teeth are so obvious and give him a protruding upper jaw.

The scenes at Live Aid are electrifying, and if the rest of the movie had been as good as them, the result might have been worthy of the actors playing Queen. Adding insult to injury, the video of “Don’t Stop Me Now” that plays over the credits reminds you of what you didn’t feel during the film. This clip ends up being more compelling than the previous two hours. You can’t fake too much and get away with it, and the manipulative Bohemian Rhapsody tries just that. Perhaps another team will attempt a biopic of Queen or Mercury after the taste of this concoction leaves the mouth. Until then, I’ll hold out hope for the Mötley Crüe movie The Dirt. 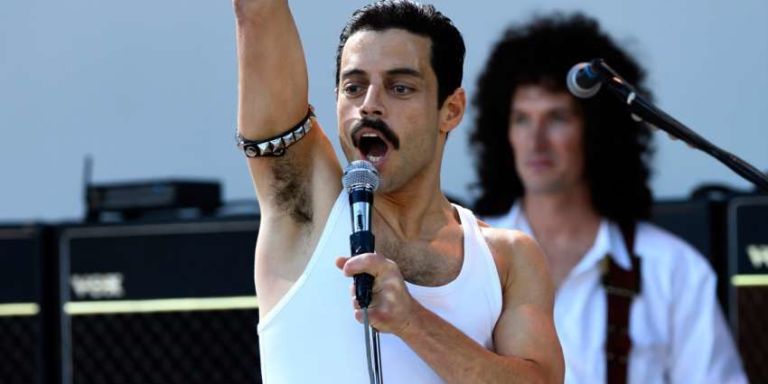