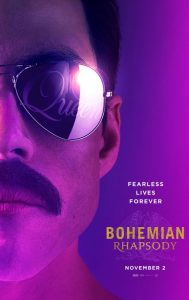 A flamboyant singer and his talented bandmates skyrocket to success in Bohemian Rhapsody.

This is the story of a young baggage handler desperate to break free from the predictable expectations of a rigidly conventional Indian father. The would-be rock star sets out to make his mark by convincing a local band to give him a shot as their new lead singer. Put off by his cockiness and distracting physical appearance, the band instantly relents once the soon-to-be-christened Freddie Mercury (Rami Malek) belts out an impromptu tune. Mercury and fellow musicians Roger Taylor (Ben Hardy), Brian May (Gwilym Lee) and John Deacon (Joseph Mazzello) embark on a journey that forever crowns Queen as rock-and-roll royalty.

No rock biopic in memory started off with more compelling potential than that of Mercury and his iconic band. Mercury was the textbook definition of being larger than life. Queen’s story is similarly filled with the stuff of legend. It’s absolutely shocking that little, if any, of that drama manifests itself into this lifeless Disney-like treatment. It’s exactly the film that May and Taylor wanted, and it’s a complete bore.

The film’s been cursed since word of it first broke by way of the departure of Sacha Baron Cohen as the original choice to play Mercury. Cohen’s explanation of the breakdown in communication between himself and the remaining band members underscored alarming differences in the film’s theme and depth. He claimed that May and Taylor wanted only to tell an uplifting tale of a group of young men rising to the pinnacle of success and then overcoming tragedy to continue on without missing a beat. They appeared to want no part of a story involving details of sex, drugs or personal infighting — in other words, the very things that make for a compelling plot. Later, the studio replaced famed director Bryan Singer over disagreements involving health concerns, leaving behind a film with no clear vision.

The result is a film that feels about as authentic as a Milli Vanilli concert. Playing an impossible role, Malek spends much of the film fighting ridiculous prosthetic teeth. The real Mercury did have strikingly bad teeth, but nothing to the degree portrayed. It took me half of the film to ignore them. The dialogue is little more than a series of trite monologues from Mercury. None of it rings true. The plot is equally tone-deaf. Mercury’s demanding father spends most of the film showing utter disdain for everything that his son does only to have it evaporate in an inconceivable instant. Mercury’s drug use and sexual escapades, central to what made him who he was, are cast off as mere afterthoughts. According to the film, Mercury was once in the the same room with cocaine and kissed a guy once or twice. His acquisition of AIDS takes on the aura of the Immaculate Conception. The most damning moment is a scene in which Mercury implores his bandmates to remember all of their endless bickering, their countless arguments over song credits and their personal battles. It all sounds fascinating, except that we never see any of it.

The highlights are as scarce as the truth in this film. The performances are solid, especially those from Hardy, Lee and Mazzello as the other members of Queen. Mike Myers gets a nearly-unrecognizable cameo that’s only blown with a lowbrow, cheesy joke. The real star is Queen’s catalogue of hits. The open beats of each unforgettable masterpiece rouse us from the deep slumber to which we return the moment that the music stops. 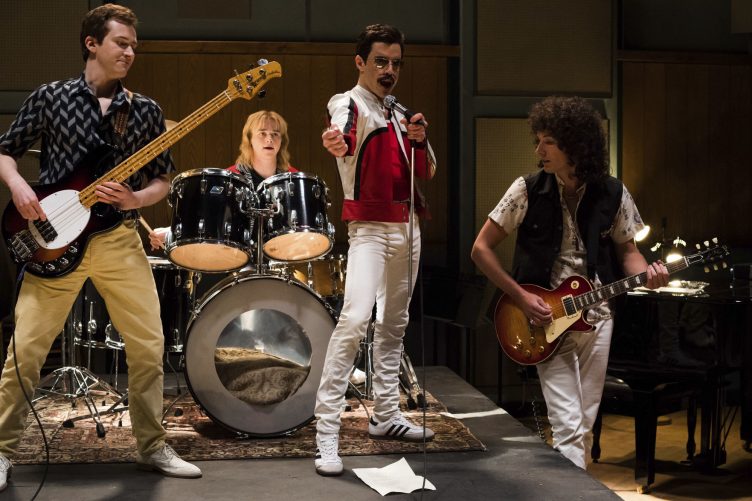