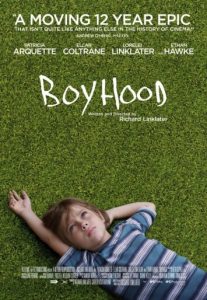 Two children and their divorced parents weather the changes of life over a 12-year period in Boyhood.

Six-year-old Mason Jr. (Ellar Coltrane) and his eight-year-old sister Samantha (Lorelei Linklater) live in a simple Texas home with their single, blue-collar mother Olivia (Patricia Arquette). She decides to move the family to Houston for a better paying job and to be closer to her mother. Their new home will also be close enough to the children’s estranged father, Mason Sr. (Ethan Hawke), for him to start having some influence on all of their lives.

This humble beginning marks the start of writer/director Richard Linklater‘s labor of love that’s unique in both its scope and approach. Linklater shot the film in stages over 12 years. As a result, we get to see all of the major characters age naturally before our eyes. The children, not surprisingly, show the most obvious changes, growing from adolescence through their teen years and into young adults. Voices and faces change. Breasts and facial hair emerge along with personalities that evolve throughout.

The sheer audacity of the project deserves recognition in its own right. Just getting the commitment of the actors for such a long project is no small task, including the director’s own daughter. Of course, there are risks. What if one of the actors withdrew or, God forbid, passed away? If anyone was up to the task, it’s Linklater, who has some experience with long-term role reprisals. He previously wrote and directed a celebrated love story between two characters in 1995’s Before Sunrise and revisited in 2004’s Before Sunset and 2013’s Before Midnight. 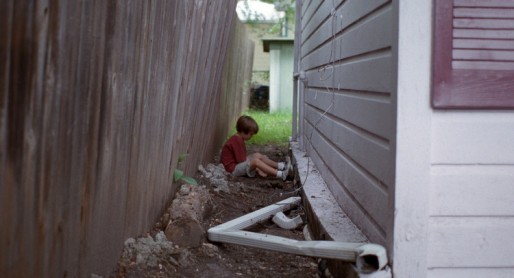 While the idea behind the film is a bold one, the lack of a compelling story makes this little more than a curious gimmick. It’s a mysterious and alluring tale that unfolds over nearly three hours. Never before has such a long running time felt so claustrophobic. The result seems more like a series of loosely-related vignettes than a fluid journey. The daughter starts off as the obvious standout of the film. She’s absolutely electric in every early scene and unfortunately fades more into the background as the years pass by. It’s also interesting to watch Arquette transform from a downright horrible actress into a very capable one. Hawke gives the most level portrayal of the group while also seeming to remain fairly ageless in the process. Coltrane, as the adorable son, takes up the baton after the first hour and matures into a complete actor and teen sex symbol by the story’s end.

Is it more than just a gimmick? It certainly has its fair share of challenges. Its three-hour length simply doesn’t allow for any one segment to take hold. Just as each one gets interesting, we’re forced to jump forward to another moment in time, often with its own new story line. As a result, the story continually keeps us at arm’s length, never completely letting us absorb the full power of any one scene. The title is also misleading because it’s not so much a story about boyhood as it is a microcosm of a typical, fairly mundane family unit.

Along the way, it’s peppered with some nice moments and several nuggets of wisdom. The main issue, however, remains. If you took this same story and presented it in a traditional film, it wouldn’t be all that compelling or novel. The only truly interesting facet of the film is its 12-year shoot, yet I still found myself captivated by the experience.