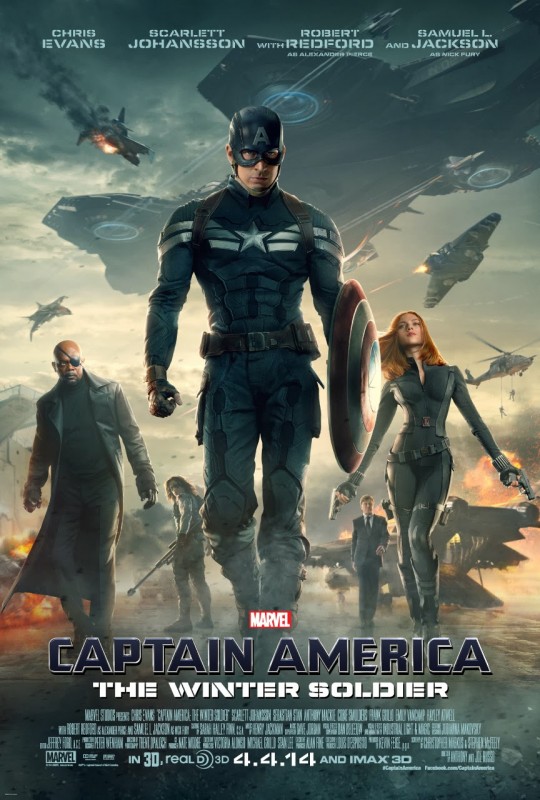 It’s no secret that I’m underwhelmed by origin stories when it comes to superhero movies. I understand why they exist, and I tolerate them with every reboot of the Spider-Man and Batman franchises. I prefer the films where they assume that you already know something about the characters and just plop them in the middle of a captivating story. This explains the success of The Avengers and Iron Man 3. I consider the former to be the best superhero team movie and the latter to be the best individual superhero movie, yet I’m sure that there are those who would argue that other entries should take those positions. Captain America: The First Avenger was Captain America’s origin story and really only held my interest in that it set up The Avengers and other future exploits for the patriotic hero. I had a much stronger and different reaction to the second film in this series. Captain America: The Winter Soldier is every bit the action-packed comic book film that I expected, but it rises above any standard approach because its widely accessible plot is like something out of a spy film or the Bourne series.

Captain America: The Winter Soldier is in really good hands because it combines talents from comedies and previous Marvel outings. Directors Anthony Russo and Joe Russo directed TV series Community and Happy Endings as well as quirky comedy You, Me and Dupree. Writing team Christopher Markus & Stephen McFeely wrote the first Captain America film and Pain & Gain and cowrote Thor: The Dark World. This talented pairing carries over to the third entry in the Captain America series due in 2016, so I can’t be the only one who recognizes their synergy on this current project. There’s a master plan of Marvel properties that leads up to and beyond the next Avengers movie, and Captain America is a big part in that plan.

The complex plot mixes the present and the past, good and bad and allies and enemies in a surprisingly good way that feels like what it might be like if they gave James Bond superpowers. Steve Rogers aka Captain America (Chris Evans) is living in Washington, DC, following the events of The Avengers and adjusting to this modern world without the people and limitations from the past. Nick Fury (Samuel L. Jackson) is the director of S.H.I.E.L.D. and sends Captain America and Natasha Romanoff aka Black Widow (Scarlett Johansson) to a S.H.I.E.L.D. ship in the Indian Ocean when it’s attacked by pirates. The real purpose of the mission and its aftereffects aren’t revealed until later, but this first mission is the start down a path where loyalties are tested and the presence of the evil HYDRA organization within S.H.I.E.L.D. reveals which side agents and others are on. Throw in the mystery surrounding the titular Winter Soldier (Sebastian Stan) with a metal arm, and you’ve got a bit of a head scratcher that doesn’t get resolved until the final minutes. I will say that I was confused before seeing this movie and thought that the title referred to Captain America himself. It suggests that the filmmakers need to pick a better subtitle for the third movie.

I was impressed with the cast from the leads to the minor parts. Evans and Johansson make a great team. Their roles are much more physical than what I remember from the past films, and they’re not hard on the eyes, either. Robert Redford has a major role as Alexander Pierce, a higher-up at S.H.I.E.L.D. who has known and worked with Fury for many years. Redford brings a certain gravitas to this role that takes it closer to other espionage movies. Jackson just brings an assured presence to all of his roles, and this one is no different. Anthony Mackie is Sam Wilson aka Falcon, a former combat soldier who now works as a counselor in DC and uses a spectacular pair of mechanized wings. Although he makes his debut here, he has plenty of key scenes. S.H.I.E.L.D. agents include Maria Hill (Cobie Smulders in a crossover role from the TV show Agents of S.H.I.E.L.D.), Brock Rumlow (an effectively menacing Frank Grillo) and Kate/Agent 13 (Emily VanCamp of ABC’s Revenge). Although there are some jokes and light comedy here and there, this is a very serious movie with characters put in danger at every turn. I felt the tension throughout, and the story kept me involved from beginning to end. 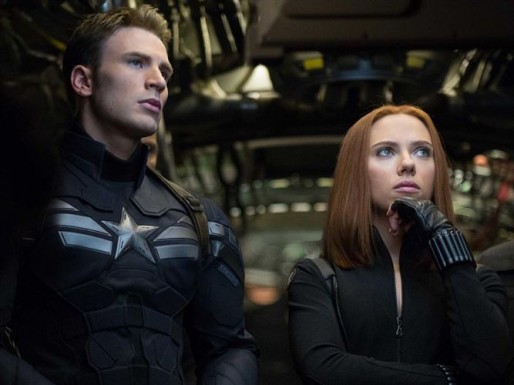 The fight scenes and physical effects are memorable because they are both believable and straight out of an enhanced reality. Captain America moves so fluidly through his environments that his style is clearly influenced by parkour. He uses his shield as an offensive weapon more than he uses it for defense, and that shield is both speedy and strong. Romanoff, Wilson and the Winter Soldier also prove their abilities in various scrapes and fight scenes. Special effects are intrinsic to these kinds of movies, so the ones that stand out involve the more complicated scenes. There are a number of car chases that had my blood pumping, and the airborne scenes involving the Helicarriers are a feast for the eyes. There is probably not one scene that doesn’t involve some kind of special effects, whether it’s the vintage computers in one key scene of revelation or the aerial antics in the second half. I want a pair of wings!

There have been so many Marvel properties brought to the silver screen at this point that it should be no surprise that there’s a lot of synchronicity among the various characters and films. I was especially impressed that this outing felt like it was a part of a larger Marvel universe rather than isolated to its own set of locations and characters. There are brief appearances by characters from the Iron Man series as well as Captain America: The First Avenger. If you pay attention to the dialogue, you’ll also hear Bruce Banner’s name brought up a few times. I like how it all fits together, and I hope that connectedness carries through to the next batch of releases. Through all of these films, there is one constant — Marvel founder Stan Lee. At this point, his humorous cameos are like those of Alfred Hitchcock in his movies. Stan the Man is in his nineties, so I hope that the directors of these Marvel flicks pin him down for a few hours or days and film dozens of potential cameos for future projects so that he lives on in them for years to come.

There’s nothing that I can say, bad or good, that will keep Marvel fans and those who enjoyed The Avengers from a trip to the theater. The presentation of the story like an unfolding spy drama will surprise a lot of people and attract others who have little or no interest in superhero films. As in the past few Marvel movies, there are scenes after the credits roll that provide glimpses of titles to come. Writer/director Joss Whedon contributed one of these scenes, and they tie in with Avengers: Age of Ultron. You rarely see audiences sit through credits, but those in the know will stick around for these bits. Captain America: The Winter Soldier doesn’t let you catch your breath until after that second bonus scene and leaves you wanting more, which is what I want from every moviegoing experience.