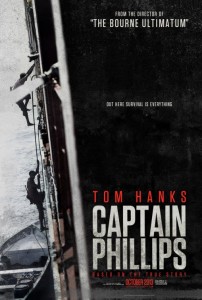 An American cargo ship is boarded by Somali pirates who take its captain hostage in the true-life tale of Captain Phillips.

In April of 2009, the Maersk Alabama set sail from Oman, Jordan, with 17,000 metric tons of cargo bound for Mombasa, Kenya. Their route took them directly through an area where Somali pirates had been known to operate. On April 8, four such pirates managed to board the Alabama and, ultimately, ended up taking its captain, Richard Phillips (Tom Hanks), hostage in one of the Alabama’s escape vehicles.

The desperate pirates kept an understandably stressed Phillips on the lifeboat for the next five days, hoping to deliver him to their warlord bosses on the Somali shore. The U.S. Navy responded by sending in several large Navy vessels, and the President sent in the Navy SEALs.

The film takes us from Phillips’s home in Vermont just before he leaves for his flight to Oman through to the final resolution of the event a few days later. We meet a family man who’s earned his captain’s bars by being diligent, organized and aware. The crew, we’re given to understand, were mainly there for a paycheck and find Phillips’s by-the-book approach unnecessary and somewhat trying. All of those concerns are retired once the pirates actually show up, of course. 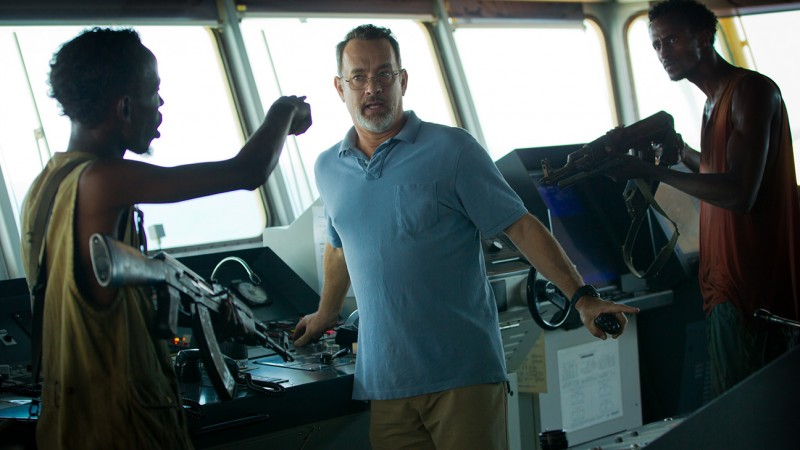 This is a story that, on its face, seems likely to be incredibly obvious and dull for a 134-minute film, and yet it’s anything but that. It instantly grabs your attention and never lets go, even when the entire film changes direction for the second half. The initial scenes do a solid job of explaining the landscape. We see the route the ship will travel. We understand that there aren’t many other options, and while there may be pirates out there, that’s the risk every crew member accepted when they took on the job.

This is nearly flawless filmmaking. The production values are exceptional. The plot is riveting. The look, feel and sound are perfect. When it comes to the acting, everyone excels. This is Tom Hanks’s best effort since Saving Private Ryan. He even manages to look physically different as the stress builds. The lead pirate, Muse, is played by newcomer Barkhad Abdi. The film wouldn’t work at all without his pitch-perfect performance. The other actors playing pirates have an easier task but deliver the goods as well. We’re uncomfortable every time they’re on screen.

As the final scenes play out, you realize just how emotionally invested you are, and the release is quite surprising and palpable.

I did say it was nearly flawless. First, there’s a major question about why the Navy wasn’t around to help out sooner. Then there are a few interactions with the pirates that may cause a raised eyebrow or two.

The Navy’s absence becomes crystallized when you consider the current-day viewpoints being shared by the rest of the ship’s crew. Many of them are are suing the shipping company, claiming Phillips was reckless in his decision to embark on the chosen route. They’d received clear warnings not to sail within 600 nautical miles of the coast. When they were boarded, they were just 240 nautical miles from shore. The film never mentions this anomaly. The crew claims this was purely done to save the company money with no regard for their safety. Thus, the Navy was farther off the coast because that’s where they believed our ships would be. The film chose to give us Phillips’s version of events, and not surprisingly, he comes off as a hero instead of a timid employee only concerned with keeping his bosses happy.

While we can’t yet be sure which story contains the larger grains of truth, the one thing we can say is that the film presents a tale that feels excruciatingly real and packs a completely unexpected and effective punch.