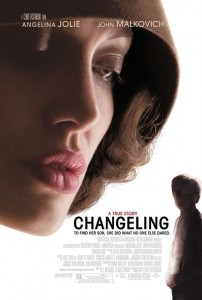 Clint Eastwood has always amazed me. Here’s a guy that has re-invented himself so many times over the years. He starts out in spaghetti westerns and moves on to better westerns, then becomes a top action hero followed by a solid drama actor and finally one of the very best directors the industry has to offer. You’ve got to admire a guy that can be that successful for that long while also changing roles to boot.

His current film as director is Changeling. It’s a surprising story about a real event that started in 1928. To tell you about the plot is to expose a bit too much. Suffice to say that the event is an emotional one involving a mother and her son and the truly infamous interactions with the corrupt and inept Los Angeles police department.

The main character is Christine Collins played by Angelina Jolie. Jolie has become a lightning rod for criticism mainly as a result of her own choices in life. She chooses paths that beg attention and many reviewers just can’t get around that. Her portrayal here is excellent and yet half the reviews I see mock her handling of the role. It’s just not warranted. She plays it wonderfully.

Another prime character is played by the always-dependable John Malkovich. He plays a local religious icon determined to expose the injustice and extremes of the police. Malkovich is one of those actors that seemed timeless to me but not now. Here he clearly looks much older and it’s going to be hard to adjust to seeing him playing old men from here on out. Of course this effort is no different than the rest of his work.

The story is a bit detailed and can demand at times that the viewer pay attention without drifting too far. For me that doesn’t mean it was slow. Some have said that. It was long but it always had my attention.

A few of the scenes are downright gut-wrenching. Do not see this if you’re not able to handle serious pulls at your heart and mind.

The most amazing thing to me about the movie is that, while other movies often just paste on the label, “True Story”, this one deserves to trumpet it loudly. Clint Eastwood took the actual events and almost always simply tightened them up. I found only a few instances of dramatic license. The true events just didn’t need very much in the way of added flourishes.

His attention-to-detail for the main plot points is excellent. It’s a story you won’t soon forget and even the most implausible points are simply a re-telling of what happened. Reviewers who questioned this without checking their facts should be ashamed.

The biggest criticism I can levy is that it felt a bit too much like Eastwood’s previous movie, Mystic River, for much of the movie and that might distract some viewers.

Regardless, I was haunted by this movie and for me that means it was a good experience. Many in the theater sat motionless after the film ended. It’s a powerful film telling a powerful story by a director who knows what he’s doing.

Another interesting thought is that Eastwood has now amassed enough winning material in his career as to finally be one of the few stars that you think of with the intent of seeing all their work. Alfred Hitchcock is the classic example of this. You know that if a film has either of their names on it you’re very likely to enjoy the investment.