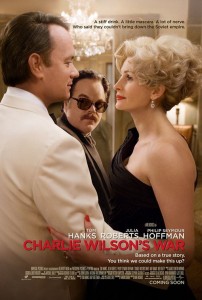 We saw Charlie Wilson’s War last night. This is a movie starring Tom Hanks that I’ve been meaning to see since December and just couldn’t get to. It’s worth more of an effort.

While the movie isn’t an Oscar contender it’s a bright, witty, entertaining movie that really does make you think about how our government works and how one person can still make a difference within its confines.

The entire acting crew does a tremendous job in it. Most impressive is the always great Philip Seymour Hoffman in yet another perfect role for his style. There’s also the, of late, rare appearance by Julia Roberts who looks at once like a typical middle-aged upper-class elitist and again a complete sexy bombshell. In fact, if anything a scene where Roberts strips down to a bikini is a bit distracting as it doesn’t seem to fit the character she’s playing but she looks so good in a bikini that I really don’t care. It’s a solid performance regardless. We also get to see Amy Adams who seems to be in every movie lately and that’s also fine by me. Hanks is, of course, Tom Hanks so he does this sort of role in his sleep.

I’m not sure how true-to-life the story is and I’m sure that the title character was far more complex than the one we see presented here but I would love to know what degree of realism was involved. It’s certainly believable that everything shown could have happened fairly closely to this.

The most impressive thing about this movie, truth be told, is that it has really made me re-think my position on current day Iraq. The movie is about how we managed to defeat the Soviets in Afghanistan and then, by completely abandoning it at that point, created the very problems we have today there. Had we just followed up with investment to rebuild the schools and infrastructure, perhaps it would have turned out better for us.

This movie is worth it if for no other reason than to make you wonder about such things as well.