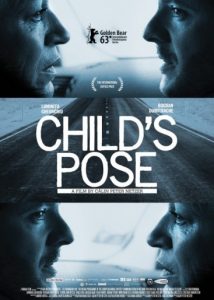 A controlling mother tries to save her son from a manslaughter charge when he accidentally hits a young teen in the Romanian film Child’s Pose.

Everyone’s met a mother who seems a bit overprotective when it comes to their children. In some cases, that overbearing approach leads to major developmental issues for the child. They’re unable to cope in the real word, never having to face life’s issues on their own. It can leave them disconnected or even fearful of things to which most of us don’t even give a second thought.

Such is the case with Cornelia (Luminita Gheorghiu), a well-off architect from Bucharest, and her adult son Barbu (Bogdan Dumitrache). One night, she receives a call that all parents fear. Her son’s been involved in a car accident that resulted in the death of a 14-year-old boy whom Barbu didn’t see in time. Cornelia rushes to the police station to immediately take total control of the situation and to limit her son’s liability in the incident.

Gheorghiu is the heart of the film. Her Cornelia is all business, leaving little doubt as to who’s in charge at every moment. Even when you think she’s cornered, you quickly realize that it’s only because that perception is her best advantage. Her acting is, for the most part, the most redeeming quality that the film provides.

It’s clear that the objective of the film is to shock us all as a tense psychological drama. but it just doesn’t work. We’re supposed to be repelled by the class manipulation that Cornelia brings to bear. Unfortunately, in this day and age where such realities are commonplace, it’s like expecting the audience to be shocked that Tuesday follows Monday. In our own society, lawyers would prevent us from even considering many of the interactions that are designed to astonish us. Nothing she attempts to do is all that surprising, and it’s nothing that any mother in America wouldn’t do without hesitation.

The film’s also bogged down by countless, drawn-out, tediously unnecessary scenes that so often impress critics but bore the hell out of almost everyone else. Nothing about the approach adds tension. There’s an entire laborious subplot regarding Barbu’s girlfriend (Ilinca Goia) that exists to drive home a point that we all already understood from the outset and that could have been underscored in a sentence or two.

Fans of exceptional acting and a deep, methodically-paced plot will likely find much to applaud. Almost everyone else will continue to wonder what all of the fuss is about.