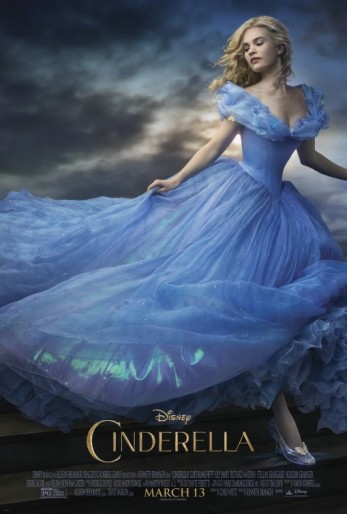 The translation of animated properties to live-action movies has a mixed past. I still cringe when I think of Speed Racer and The Flintstones and its sequel. I was not impressed when I heard that there was going to be a live-action version of Cinderella. After all, the original Disney classic is one of the studio’s best, and it inspired countless young girls to fantasize about what it would be like to be a princess. Last year’s Maleficent proved that I should keep an open mind about such translations. This year’s Disney update/adaptation is just as exciting and entertaining while paying homage to the original. Cinderella brings audiences a new take on the classic that will be remembered long after midnight on the day that they go to the theater.

Cinderella is in capable hands with director Kenneth Branagh, who one could argue has had more success in recent years behind the camera instead of in front of it like Clint Eastwood. Writer Chris Weitz might seem like an unlikely person to script this piece, but his experience as writer/director of The Golden Compass and writer/codirector of About a Boy shows that he has a grasp on both fantasy and drama. Ella (Lily James of Downton Abbey), later nicknamed Cinderella, has a tough time of it as first her mother (Haley Atwell, briefly) and father (Ben Chaplin) die and she’s left with her wicked Stepmother (Cate Blanchett) and two annoying stepsisters — Drisella (Sophie McShera) and Anastasia (Holliday Grainger) — as well as all of the chores as the Stepmother’s servant. When the Prince (Richard Madden) is looking for a bride at the insistence of the King (Derek Jacobi), he holds a grand ball for all of the maidens of the land to attend so that he can find his princess. It’s sort of like a one-night, speedier version of The Bachelor without the sex. Initially blocked from going to the ball, Cinderella manages to attend anyway with the help of her Fairy Godmother (Helena Bonham Carter), and you probably know how the rest goes down.

I was quite impressed with the mixture of drama, pathos and romance. Cinderella has it pretty bad cleaning up after the terrible three in her house. It’s a meet-cute moment when she and the Prince run into each other in the woods, so it’s a bit of a disconnect when the Prince doesn’t recognize her later on at the ball just because she has sparkles in her hair and an awesome dress. Still, the film teeters between this drama and romance in such a way to keep you engaged and concerned about Cinderella and how this will all resolve itself. Cinderella’s mother tells her to have courage and be kind, and although she does both of these things, she’s no pushover, even to her stepfamily.

The cast is pretty solid and more than I expected in a remake of a Disney fantasy. There is as much focus on what’s going on at the castle with the Prince and the King as there is with Cinderella, and that allows Jacobi to shine as the kind King with a commanding presence. Branagh has worked with Jacobi before, notably in his masterful Hamlet, and he couldn’t have picked a better King. James is beautiful, strong and endearing, and that’s what I would want in a modern Cinderella. Blanchett is deliciously evil, as is her cat Lucifer, but the filmmakers didn’t make Drisella and Anastasia ugly or awkward enough. Sure, Anastasia can’t draw and Drisella can’t sing, but that doesn’t go far enough. Nonso Anozie and Stellan Skarsgård are great in their small roles. The real star for me other than James is Carter. She looks beautiful in every scene despite her character’s klutziness, and I would argue that she is underutilized even though she also acts as the narrator. Her reinvention of the character goes a long way to selling the magic in the story.

The visuals and costumes are as impressive as the cast. From the opening shot of the castle, which matches the one that has been used in the opening credits of Disney movies for years, Cinderella is as beautiful to watch as it is to experience. Thankfully, Branagh did not go overboard with the computer graphics for the animals. The mice especially bring humor to the film without becoming too animated while staying mostly realistic. There are a few missteps with dimensions in some of the locations. When Cinderella makes her way to the attic, the steps go off into an impossibly large vertical space that doesn’t match what you see of the house from the outside. The ballroom dance recalls a similar romantic scene in Beauty and the Beast with the rotating couple. Branagh made me breathless with the best scene in the film — the midnight transformation of Cinderella and her entourage that is also a chase scene. On its own, that sequence anchors the rest of the movie. 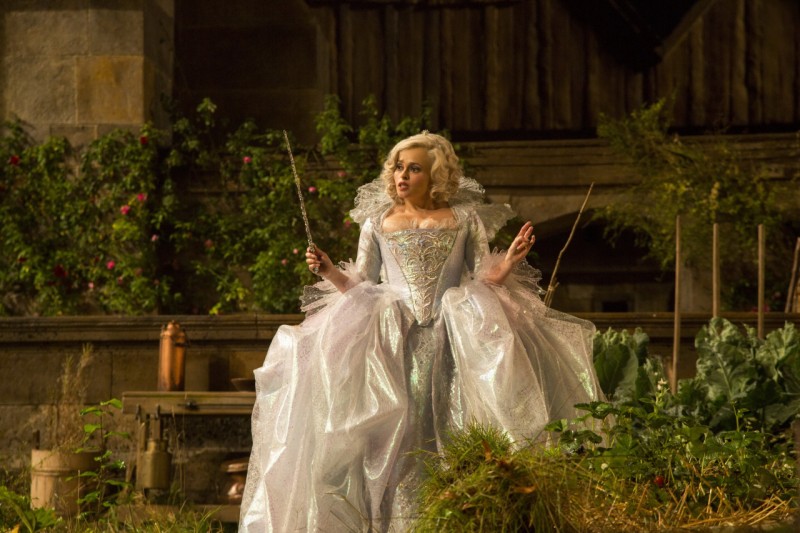 The costumes by Sandy Powell are extravagant and fabulous. The color schemes and coordination are welcome and run throughout the movie. The young Ella (Eloise Webb) has blue slippers. Later on, Cinderella wears a blue dress to the ball that matches the blue accents on the Prince. Cinderella’s pink dress is almost like a bridesmaid’s dress in comparison to her ball gown. The colors are consistent in the Stepmother (green), Anastasia (red/pink) and Drisella (yellow). It’s great to have visual cues that point you to feelings about characters without being too obvious. Blue is warm and inviting, whereas green could have negative connotations.

I’m so glad that Branagh didn’t turn this film into a musical. Patrick Doyle’s beautiful music is enough for me during the main film, and the songs on the soundtrack are saved for the credits. Sonna Rele delivers the good theme song “Strong,” and cast members James (“A Dream Is a Wish Your Heart Makes”) and Carter (“Bibbidi-Bobbidi-Boo”) follow with two songs from the original film. Although I really like Cinderella, it doesn’t mean that every Disney animated film should be turned into a live-action version. I know that more are on the way, but I hope that the success of Cinderella and Maleficent inspire filmmakers to try to match their quality. Princess films are a hallmark of Disney, and Cinderella continues that tradition with enough modern twists, content and interpretations by Branagh to revisit a familiar tale rather than just rehash it.

If one princess isn’t enough, Cinderella moviegoers also get two more in the much-anticipated Frozen Fever, a short that should satisfy rabid Frozen fans until the just-announced Frozen 2 comes out. Frozen directors Chris Buck and Jennifer Lee reassemble the cast (Kristen Bell, Idina Menzel, Josh Gad and Jonathan Groff) for a fast-paced, manic story that revolves around a birthday party for Anna (Bell) as thrown by Elsa (Menzel), Kristoff (Groff) and Olaf (Gad). Unfortunately, Elsa has a cold, and every time she sneezes, she produces three small snowmen out of each nostril. Before long, these snowmen are creating havoc that’s hilarious because they’re a combination of the mischievous Gremlins with the plentiful Minions. These creatures should be turned into toys if they aren’t already, and I like them so much that I hope that they return in the sequel. Frozen Fever introduces a new song, “Making Today a Perfect Day,” and somehow squeezes all of the original cast into its seven minutes. I expect many Frozen fans to sneak into Cinderella screenings just to watch this short again and again. Those who see the short will learn why “DRY BANANA HIPPY HAT” is my new favorite phrase.