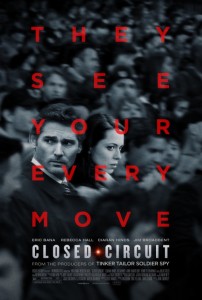 Two recently assigned London attorneys try to defend their client, accused of terrorism, and realize that all is not as it seems in the tense thriller Closed Circuit.

An alleged terrorist is arrested and accused of being the mastermind behind a brutal bombing that killed more than 120 in the heart of London. Martin Rose (Eric Bana) is brought in to defend the prisoner in his public trial after the previous defense attorney committed suicide. Also brought in is another defense attorney, Claudia Simmons-Howe (Rebecca Hall), who will represent the accused in special closed-door proceedings necessitated by highly-sensitive information that could threaten the security of the country. This curious arrangement is supported by a top government official (Jim Broadbent) who’s more interested in protecting the government than protecting the rights of those being governed.

Almost from the start, Martin and Claudia recognize that they’re not getting the whole story from anyone, including the accused. Every piece of evidence leads to more questions that no one seems to want to answer. In fact, simply asking the questions results in their own safety becoming compromised, forcing them to reconsider everything and everyone they know.

The start of the film is extremely compelling, setting the stage for a first-rate thriller. The performances and ever-present ominous soundtrack keep the pressure building. Unfortunately for this balloon, the script itself lets all the air seep out while trumpeting a mock fart until the final gasp.

There’s just about nothing here that passes the sniff test for anyone with even the most basic cognitive skills. Check that sell-by date, folks, as this one is well beyond it. The reveals are about as predictable as night following day. In fact, I suspect you can guess one of the big secrets just from my most basic description of the movie’s opening scenes. Then, on top of everything, Claudia and Martin insist on making ludicrously bad choices and doubling down on them time and again. Horror film characters are rocket scientists by comparison.

Then, as the film winds down, the producers give us a resolution that could have been applied in the first fifteen minutes, avoiding the entire messy disaster and saving viewers the embarrassment of having to admit they not only sat through this but paid for it to boot.

The last insult comes with an ending scene that acts as if the audience just sat through a romantic comedy and not a thriller. Then again, maybe that’s a fitting ending for a thriller without any thrills.