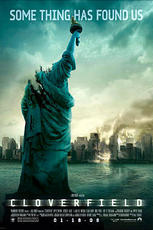 We saw Cloverfield yesterday. It’s been talked about as a new Blair Witch-like experience in that there are no big name actors and it’s all shot from a first-person perspective where the viewpoint is all taken from a video camera held by one of the participants. However, unlike Blair Witch, this movie isn’t just a low-budget affair. It’s full of fantastic special effects that really add to the impact of the movie.

The story itself is paper-thin and you shouldn’t poke at it very much or it simply won’t stand up to the scrutiny. However, just take it in and enjoy the ride. It does take a little bit to get going but will suddenly jump right into the main plot of the movie. In fact, I was just about to give up on the whole thing when this happened and it felt just like it would in real life. You’re in the middle of conversation and, boom, something huge interrupts the affair. In this case that something is a huge monster that has appeared right in the middle of the city.

The special effects in the movie are quite stunning. It’s hard to imagine how they were able to get Manhattan to look so incredibly devastated. The direction is also fantastic. You only get teasing glances of the monster initially and when you finally see it all it’s well worth the wait. The tension is perfectly divvied out keeping you wondering what’s next. Even the cursory background acting was superb. Shots of soldiers going all-out to fight this being impress at every turn. I couldn’t get enough of one street battle.

I’m not in any big rush to see this again but it is a fun time the first time through.