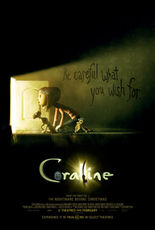 Next up for me is Coraline, a 3D stop-motion film, that very much has the look of Nightmare Before Christmas. The makers made sure to hype the fact that Coraline is brought to you by the same people the gave us Nightmare. This is about as accurate as stating that an Apple sales clerk brought us the iPhone. The idea was to evoke Tim Burton without being able to actually use his name as he had nothing to do with this film.

Coraline, let it be said, is one of the very best looking films of this type I have ever seen. The visuals just pop off the screen and every shot begs you to take it all in as fast as possible. The 3D was also decently done though several reviews made it sound as if it has never been done better and that I can’t agree with.

Characters manage to bring with them a similarity to expressive caricature only possible in animation and here it’s used effectively. Be forewarned, this approach extends to the extreme including gratuitous shots of overly well-endowed and barely clothed characters. Many parents in the theater let out a notable gasp of embarrassment during one notable scene.

This is a story that so wants to be bigger than it manages to actually be. The mysterious beginnings are laid out in exquisite detail and then the story starts to grind to a slow stop. We’re presented initially with an elaborate Rube Goldberg-esque puzzle that challenges your mind only to have it all just resolve with simplistic ease. Worse than that is that several earlier seemingly critical elements are either forgotten or quickly dismissed. It makes for a very unsatisfying conclusion.

There are some bright spots. The main character does win you over. Her sense of wonder with the world at hand brings back all the splendor of childhood innocence. The main antagonist, until revealed, quite convincingly fills you with a perfect sense of dread. Sadly these spots are just that—spots and not enough of them to cover the other holes.

A number of other viewers did seem impressed by it but not this viewer. It’ll be hard to top the van Gogh-like imagery but that isn’t enough to carry the film.