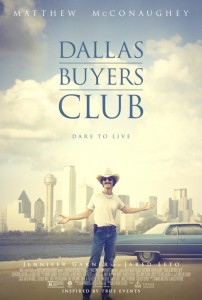 A Texas cowboy has to confront the risks of his devil-may-care lifestyle when he contracts HIV in Dallas Buyers Club.

The genesis of HIV and AIDS awareness represented one of the ugliest chapters of our recent history. It sprang onto the national spotlight around 1984 and was so misunderstood that it was originally stigmatized with the acronym GRID (Gay Related Immune Deficiency). President Ronald Reagan‘s own Director of Communications, Pat Buchanan, wrote an op-ed in the New York Post suggesting that this was God’s revenge on homosexuals. The President himself made entirely erroneous comments about it that only deepened unfounded fears.

In 1985, a stereotypical Texas cowboy, full of unfettered hubris, finds out that he’s one of the unlucky ones to contract HIV. For the gay-bashing Ron Woodroof (Matthew McConaughey), this is an affront unlike anything he can imagine. When he’s given just 30 days to live, he responds by funneling all of his negative emotions into a plan to survive. His problems are only compounded by the stain of ignorance associated with the condition by everyone he knows and meets.

Woodroof quickly realizes that the disconnect is so universal that even his doctors can’t be trusted. He’s driven to find his own treatments, regardless of their legality. Of course, he also has no problem with becoming a drug dealer for the growing number of others similarly afflicted. As word of his business grows, it also manages to attract the authorities, which in turn transforms the story into a national debate about the rights of terminally ill patients trying to save their own lives.

This is a gritty, no-frills story that perfectly captures the prevailing tone of the day. The film never falters with respect to the material. We can fully sense Woodroof’s single-mindled urgency, frenetic energy and crushing frustrations. Much of it is due to another exceptional performance from McConaughey. Many of us just can’t find this guy to be reliable. He turns in award-caliber work in films like Amistad and A Time to Kill, but for every one of those, he seems to have three Saharas.

The supporting cast doesn’t lower the bar an inch. Jared Leto pops off the screen, playing a drug-addled transsexual in his first role since 2009. Jennifer Garner brings the perfect mix of empathy and intellect to her key role as one of Woodroof’s doctors. Then there’s a an old favorite of mine, Griffin Dunne, playing a disgraced but effective doctor. Finally, Denis O’Hare does a wonderful job playing the typical disconnected, by-the-book doctor whom Woodroof first encounters.

Both McConaughey and Leto undergo a complete transformation during the film. Both lost drastic amounts of weight for their respective roles, and the result is unmistakably impacting. In fact, in the case of McConaughey, it’s a bit too much. We know the actor as a vibrant, buff, boy-toy type, but here, it’s impossible not to continually be reminded that this emaciated skeleton is the same guy. As good as he is, I’m left to wonder if, perhaps, the film would have been better served with a lesser name.

One other issue is the resolution of the film. It ends too soon, providing the final chapter only via cold, fast, on-screen text. Another real problem for me is the disturbing amount of license the writers took in modifying the real story. Among the key changes, the film portrays Woodroof as a rodeo-competing, bigoted, ignorant jerk with a huge drug problem. Think trailer trash. The problem is that the real Woodroof wasn’t any of those things.

If you can forgive the creative license and forget that the star’s a sex symbol, then you’ll find a compelling, emotional film about an unexpected hero taking on all comers against all odds.