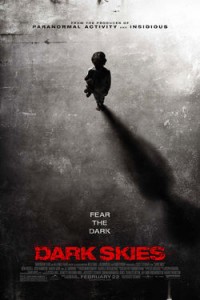 It’s so very hard to elicit real tension and fear in a movie. When it’s done right, it’s a magical thing. I love and crave those moments. I keep going back to it, but The Orphanage is really a perfect ghost story that way. On the other hand, some films spend a lot of time on setup and ratcheting up the tension and only a little bit of time on payoff. I would kill for a movie that jumps right in and doesn’t let go until the credits roll. Dark Skies is not that kind of movie. It has some great scares and creepy moments, but it largely spends too much time on setup and atmosphere instead of delivering quickly on the promise of unexplained phenomena and sinister aliens.

Dark Skies is the work of visual effects artist turned writer/director Scott Stewart (director of Priest and cowriter/director of Legion — both Paul Bettany films). Stewart delivers his most accomplished work yet, but it could have been so much more if he had dared to go there. Lacy Barret (Keri Russell) and Daniel Barret (Josh Hamilton) are a couple on the brink of collapse who are struggling to make ends meet and keep their family together. Sons Jesse (Dakoto Goyo) and Sam (Kadan Rockett) are good kids with problems of their own. Jesse is kind of a rebellious teen who hangs out with troublemaker Kevin Ratner (LJ Benet) and likes Shelly Jessup (Annie Thurman of The Hunger Games). Sam looks up to older brother Jesse yet still talks about an imaginary friend called The Sandman who lives on the Moon and visits him at night. Is this friend real? Does he come alone? Are the kids causing weird events? All these questions and more are answered over the course of the film.

A film that advertises that it’s from the producer of Paranormal Activity and Insidious should at least live up to those movies. In some ways, it does. Early in the movie, Lacy goes into the kitchen to find food all over the floor. These freaky events increase in frequency and complexity, even after the family activates their security system. Just like the Paranormal Activity series, the Barrets install security cameras throughout the house to capture what’s going on with their kids and the house. When things get really bad, they decide to talk to Edwin Pollard (a subdued J.K. Simmons), who knows a thing or two about alien visitors and strange occurrences. Simmons plays against type as a quiet, defeated man who has pretty much resigned himself to believe in aliens and their visits. His scenes unsettled me with their calm nature before the final third of the film.

Stewart lives up to his visual effects background with a lot of elements like video glitches in security footage and strange light patterns. There are other effects, both physical and computer generated, that contribute to the overall weirdness of the film. More importantly, the visual effects look like they’re physical effects to straddle that line between reality and imagination. Stewart is also smart with his camera work to scare in both anticipated shots and others that catch you unaware. Audience members jumped and screamed at least three times, and that kind of response is contagious. The test for me in a horror film is whether they use the cheap medicine cabinet/refrigerator door gag: when someone opens one of them and then closes it to suddenly reveal something or someone that came into view behind the door. Dark Skies earned my respect by not pulling stunts like that.

Movies like this work if they make you jump out of your seat, hold your breath or otherwise react as you would in real life. The cast and their reactions are believable with Russell and Hamilton perfect as the parents who feel helpless in light of unexplained bumps in the night. There are a good variety of weird events in the film like the kitchen scene and the part they ruin in the trailer with birds banging into the house’s windows. I just wish there were more of these scenes and that they ramped up earlier in the film. Instead, Dark Skies spends most of its running time with hints, teases and setup. This approach keeps the movie from reaching that next level of fear and puts it in a class with a host of similar movies. It’s worth your time if you like these kinds of films, but it’s not different or scary enough to break new ground.