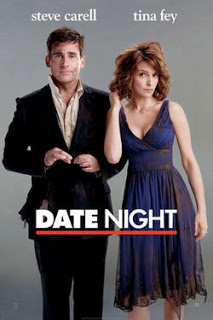 A couple desperate for a carefree night on the town get far more than they bargained for in Date Night.

It seemed inevitable that Steve Carrell and Tina Fey would end up together in a fairly straight-forward rom-com.  The powerhouse comedy duo play typical suburbanite parents caught up in the monotony of everyday life. They love one another, but both of them wonder if there isn’t more to life, especially when their best friends tell them they’re divorcing simply because of boredom.

The first thing that struck me with the film was the effortless chemistry between Carrell and Fey. They just seemed perfect together. There was never a moment where I felt as if they weren’t married for the last decade or so. Everything about them just oozed “lifetime partners”. After the complete lack of chemistry in Hot Tub Time Machine this was a welcome change.

The characters are starving for something new and when the opportunity presents itself they jump in for all it’s worth. Their plan is to head to the town’s most outrageously expensive, hoity-toity restaurant. When they arrive it’s booked solid. To get around that hiccup they adopt the name of a couple who appear to be passing on their reservation. The old saying, “Look before you leap” was never more apropos. They have no idea what it is they’re actually jumping into. This surprising plot twist surprised me to no end. I hadn’t seen any previews so when this turned into a bit of an action/adventure/thriller romp I was totally shocked.

Another great plus for the movie is a wonderful character part played by Mark Wahlberg. It’s yet another case of excellent casting. The interaction between Wahlberg and Fey is priceless.

The story itself is a bit thin, losing its way once or twice, but then pulls off an acceptable finish. All in all it’s a decent effort that’s entertaining and generally well done. It won’t win any awards but it’ll probably be a hot rental property. It’s also a perfect choice for your carefree date night.