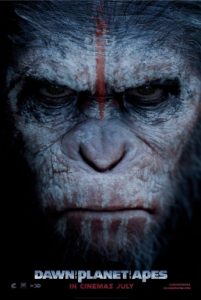 As humanity struggles for survival, simians take the first steps toward dominance in Dawn of the Planet of the Apes.

It’s 10 years after mankind infected itself with a fatal virus that was initially designed as a wonder drug for all manner of brain disorders. Instead, it quickly spread across the globe, taking humans to the brink of extinction. Now, highly-evolved apes — exposed in early drug trials and affected by only the positive aspects of the drug — and their offspring look to exert their will as Earth’s most prolific species.

Their leader, Caesar (Andy Serkis in a standout performance), has led the apes deep into the forest, far from any remnants of the human race. They’ve raised families there and created an idyllic community free from the suffocating restraints as man’s lesser cousins. Just as Caesar contemplates their fate, a small group of people, led by an empathetic father named Malcolm (Jason Clarke), stumbles into their midst. Their presence reignites the fear and distrust that has always marked the foundation for our mutual relationship. Wanting nothing to do with their kind, Caesar — to the group’s complete shock — speaks in their own language, demanding that humans never return to the woods that the apes now claim for their own. Many among his tribe would rather strike out against the humans, looking for revenge and the ultimate freedom they’re sure would come from man’s complete eradication. Caesar, however, fears that such a move would trigger a costly war for his own species and hopes to take advantage of their one chance for peace. 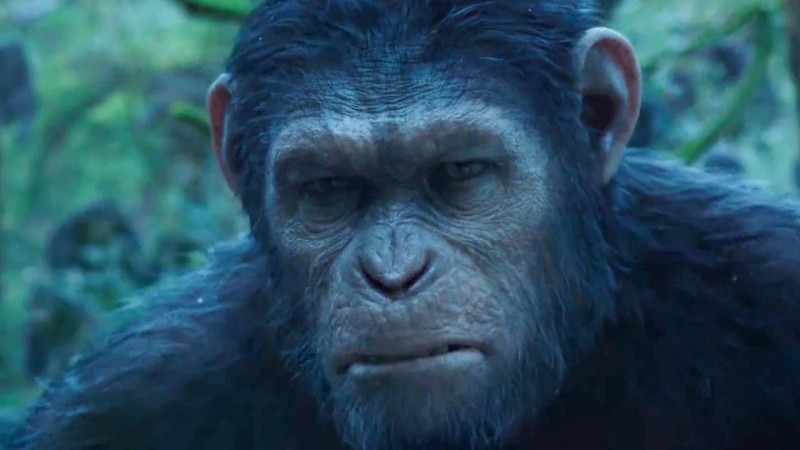 In the sequel to 2011’s Rise of the Planet of the Apes, husband-and-wife writing team Rick Jaffa & Amanda Silver have penned a much darker, far more politically charged tale than their previous entry. The parallels to our own battle with racism are carried forward from the original but are now melded with the complexities of inner-species strife. The most stunning aspect of their latest installment is that we’re never sure for whom we should be rooting. The film pits our own capacity for understanding and empathy against us. We despise the ignorance of the worst humans only to then be repelled by the same traits in equally challenged simians. Both sides are undone by their own cross-purposes.

Director Matt Reeves masks the entire film in an eerie, foreboding look and matches it with a soundtrack that sneaks effortlessly into our most personal spaces. The effects represent a solid improvement over the original as well. The apes are able to convey highly effective emotions along with all manner of convincing poses and actions.

The film does manage to cut some unnecessary corners. Aside from Caesar, nearly every other character lacks any useful depth. Performances from Gary Oldman, Keri Russell and several of the apes, among others, come out of nowhere and resolve in equally murky fashion. It also leaves a number of plotlines dangling with no clear explanation. Viewers who didn’t see the original might also wonder, at first, if the apes converse telepathically. Many overly brief hand gestures are followed by impossibly long lines of subtitled text. I should also point out that, contrary to what you might otherwise suspect, no human in this film was present in the original. They apparently died off in the global epidemic.

While it bears little resemblance to the cute, eye-opening experience of the first film, this episode is every bit as entertaining — and then some. It manages to take what was already a solid effort and improve on it in nearly every way. It’s a tension-filled thrill ride that leaves behind a haunting residual afterimage, setting the stage for another compelling chapter.