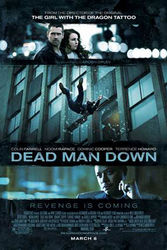 Lightning does sometimes strike twice in the movie business. Think of the Indiana Jones movies and at least the first two movies in the Alien franchise. I have to admit that I’m an optimistic moviegoer, which means that I don’t go into a movie as most major reviewers do with an agenda, an unfounded bias or a preconceived notion of what to expect. I hope for the best and get insulted when the experience fails on basic levels where it shouldn’t. Sadly, Dead Man Down is one film that both disappointed me and insulted me. I hoped for more from the combination of the director and female lead, and one could argue that they both failed. Additionally, some scenes were outright insulting in their stupidity, but they had the unintentional effect of making me laugh.

The talent involved with Dead Man Down should have elevated the movie to a higher level, but we all know how a bad script can’t be saved by even the best filmmaker or actor. Director Niels Arden Oplev (director of the upcoming TV series based on the Stephen King book Under the Dome) had great success with a little film called The Girl with the Dragon Tattoo, which also rocketed Noomi Rapace to international stardom. Rapace has had some hits and misses since then, but I’m one of those few people who really liked Prometheus. Writer J.H. Wyman (writer of The Mexican) worked on the TV series Fringe, so he perhaps thought that some elements of this film would go unnoticed as they perhaps would in a story that’s essentially spread out over dozens of hours instead of just two. I was lucky enough to attend a screening of The Girl with the Dragon Tattoo attended by Oplev in which he spoke afterwards. He turned down the two sequels because he didn’t want that commitment to prevent him from spending time with his family for so many months out of the year. After the two lackluster sequels, Oplev clearly made a bad decision, and Dead Man Down is not the comeback film he perhaps expected it to be — even with Rapace involved.

For all of this talk about Rapace, it should be noted that Colin Farrell is the star and Rapace is the female lead. Victor (Farrell) is a member of the crew of crime lord Alphonse (Terrence Howard) in Queens. (Philadelphia stood in for some parts of New York City during filming.) Victor has a friend under Alphonse named Darcy (Dominic Cooper, who should have won lots of awards for The Devil’s Double), so he’s torn between protecting Darcy and getting his revenge against Alphonse. Almost immediately, it’s revealed that Victor is a man undercover in Alphonse’s organization as someone they thought they killed. Victor is, thus, the “dead man” of the title. They murdered Victor’s wife and child, so he’s out for vengeance. Rapace comes into the picture because her character Beatrice lives opposite Victor in another high-rise building. She records Victor killing someone on her cell phone and uses that recording to blackmail Victor into killing the drunk driver who disfigured her. Victor is stuck trying to both exact his vengeance and keep Beatrice happy so that she doesn’t turn him in to the cops or blow his cover.

This story could all work, but it just seems to be slow and plodding rather than fast-paced and interesting. Victor pits Jamaicans and Albanians against Alphonse, but even that doesn’t really cause much excitement. Armand Assante and F. Murray Abraham have cameos, which seems like stunt casting just to get them into the movie. Main actors Farrell, Rapace, Cooper and Howard all do a fine job. The problem is not with their acting but with the writing instead.

That leads me to the stupid, insulting things about the film. Let’s start with the title. What does Dead Man Down mean? Hell if I know! I explained the “dead man” part of it, so the only way to explain the “down” is that image on the poster of someone falling. I don’t often comment on posters because they’re largely marketing creations with artistic interpretations instead of actual film scenes/shots, but this poster seems silly and contrived as is the film title. It gets worse. I’ll slightly ignore the stupid car stunt that you saw in the trailer where Victor somehow drives a car up a hill into the side of a house with enough force to structurally affect the living room and end up on some stairs. I don’t think a tank could have that effect. There are two things that really insulted me. Rapace is a beautiful actress who used to model as well. Her disfigurement is nothing more than a few poorly placed scar prosthetics. She’s still beautiful with the rubber pieces on her face. How can I buy that she feels so strongly that the drunk driver be killed. The only change that I see in her life is a bunch of kids throwing things and calling her “monster.” Buy a baseball bat or a handgun, and those kids won’t attack you anymore. Even worse, Beatrice has a deaf mother played by Isabelle Huppert. She’s not truly deaf but “movie deaf,” which means that she can’t hear dialogue when it’s convenient to Beatrice yet her daughter has to speak loudly or yell at other times. I gave up trying to figure out her level of deafness. It would have added a touch of humor to the film if Beatrice and Victor screamed their dialogue every time the mother was in the room. Huppert deserves so much better than this. She was better in her 15 minutes in Amour than in this entire mess of a movie.

Dead Man Down wasn’t at the lowest end of my movie scale, but that movie poster could easily be interpreted as someone who didn’t like the film jumping out of a window. I hate when talented people don’t correct themselves mid-project and instead continue to work hard to deliver drivel. All of the pieces were there in Dead Man Down to produce an effective movie, yet Oplev went down the wrong path. I only hope that Under the Dome succeeds as a miniseries for Oplev so that he can make a movie at least as good as his first outing with Rapace.